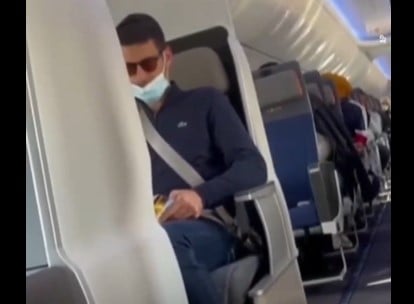 The world’s number one ranked tennis player Novak Djokovic was deported from Australia on Saturday and banned from entry for the next three years.

Djokovic has won nine of his 20 Grand Slam trophies at the Australian Open — including three in a row.

The Australian regime said his presence in the country could “stir up anti-vaccine sentiments” in their country. The regime expelled him Saturday.

Australia has deported Novak Djokovic, not because he presented any Covid risk but because government bureaucrats worried that allowing him to stay might diminish their power. From NYT on Friday: https://t.co/sRxzz8l3L0 And today: https://t.co/ilTIpdYp7q pic.twitter.com/rg84yuuVGj

And now the French Open is threatening to ban Djokovic from the tournament.

Novak Djokovic risks being frozen out of tennis as he chases a record 21st Grand Slam title, with rules on travellers who are unvaccinated against COVID-19 tightening in the third year of the pandemic and some tournaments reconsidering exemptions.

The Serbian, who has not been vaccinated, was deported from Australia on Sunday ahead of the Australian Open after losing a court case to have the cancellation of his visa overturned…

…The French Sports Ministry said on Monday there would be no exemption from a new vaccine pass law approved on Sunday, which requires people to have vaccination certificates to enter public places such as restaurants, cafes and cinemas.

“This will apply to everyone who is a spectator or a professional sportsperson. And this until further notice,” the ministry said.

“As far as Roland Garros is concerned, it’s in May. The situation may change between now and then and we hope it’ll be more favourable. So we’ll see but clearly there’s no exemption.”

Djokovic was welcomed home a hero in Serbia this weekend.
Notice he gives zero f*cks about the mask mandate too — knowing they are completely worthless.

More bad news for Novak Djokovic as he touches down in Serbia after being deported from Australia, with his unvaccinated status possibly barring him from competing in the French Open after France adopted tighter laws on vaccinations. pic.twitter.com/KSGizlF24a