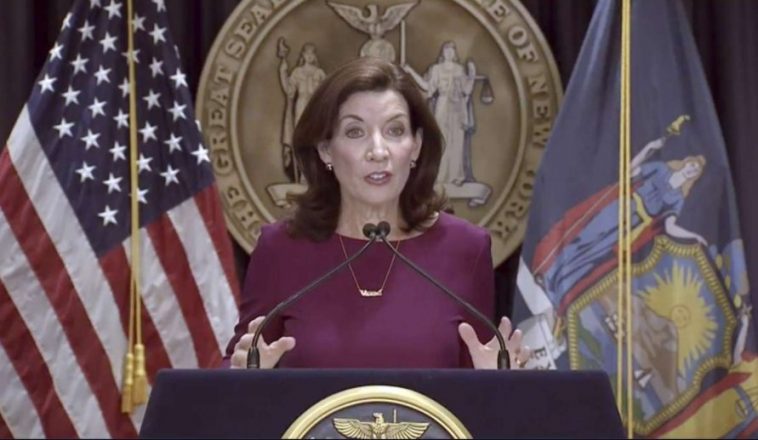 Courts may have temporarily suspended the Biden administration’s vaccine mandate, but tyrannical lawmakers are doubling down on the assault on medical autonomy in blue states around the country.

In a press conference, Hochul warned New York would require another lockdown if its residents failed to wear the masks in all indoor venues.

“I don’t want to go back ever again to where people couldn’t go to their jobs safely, couldn’t congregate. Kids couldn’t go to school. That isolation had a devastating effect on the human condition and we are still dealing with the fallout today,” she said. “So, to avoid that situation, I today am announcing that we are enacting a statewide indoor mask mandate unless a business has a vaccination mandate.

The mask mandate will go into effect on Dec. 13. The state will then reevaluate whether to continue the mandate after Jan. 15.

The governor claimed overreaching mask and vaccine mandates implemented in New York City under Mayor Bill De Blasio are effective and the rest of the New York state should follow suit.

😷This measure is effective Dec. 13

😷She’s giving businesses the option with mask or vaccine requirement

After investigating a study by Copenhagen University, Oxford University Professors Carl Heneghan and Dr. Tom Jefferson insist there is a “troubling lack of robust evidence on face masks and COVID-19.”

“Now we have properly rigorous scientific research we can rely on, the evidence shows wearing masks in the community does not significantly reduce the rates of infection,” the researchers warn in a column published in The Spectator.

At the start of the pandemic, even Dr. Anthony Fauci admitted masks do nothing to prevent the transmission of aerosols or airborne diseases.

“The masks are important for someone who is infected to prevent them from infecting someone else,” Fauci noted back in March on 60 Minutes. “When you’re in the middle of an outbreak, wearing a mask might make people feel a little bit better, and it might even block a droplet. But it is not providing the perfect protection that people think that it is, and often there are unintended consequences; people keep fiddling with the mask and touching their face.”