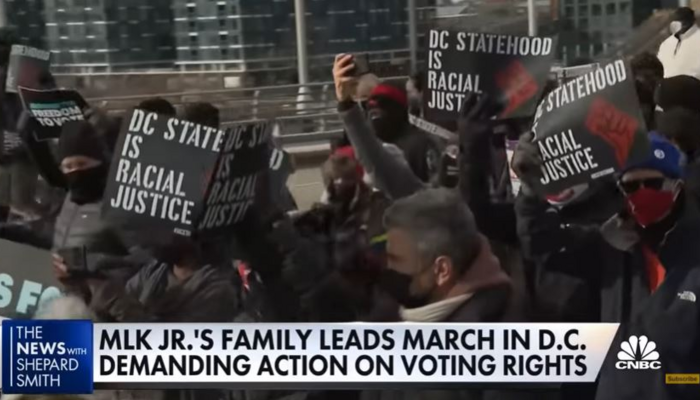 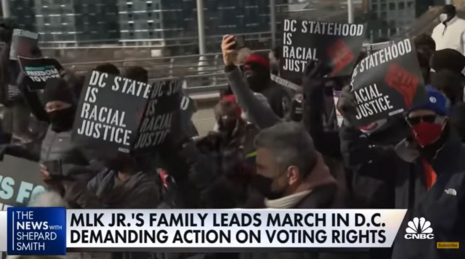 Each year, the Rev. Dr. Martin Luther King Jr.’s birthday is commemorated with marches, services and speeches. But the annual peace walk across the Frederick Douglass Memorial Bridge had an additional purpose on Monday: pushing the Senate to pass new voting rights legislation.

(The congressional legislation would combine the Freedom to Vote Act – federalizing voting, establishing nationwide standards for ballot access, and universal voting by mail — and the John Lewis Voting Rights Advancement Act, which would restore parts of the Voting Rights Act of 1965.)

The holiday came one day before the Senate returns to debate what is expected to be a doomed effort to pass the legislation. Despite the near certain defeat, voting rights activists, Democratic officials and relatives of Dr. King said they were not giving up.

He rounded up left-wing spokespeople to criticize Biden for being slow to act, while he added a racial component:

Speakers at a news conference after the march sharply criticized members of the Senate and President Biden for their failure to enact voting reforms as they focused on other Democratic priorities — and as voters’ rights have eroded under Supreme Court rulings and laws passed by Republican state legislatures that make it harder for people of color to vote.

Not even Democratic senators were exempt from being thrown in the pit of racial iniquity, lumped in with their truly racist Democratic counterparts from 50 years ago:

Other speakers at the event had sharp words for two centrist Democrats, Senators Joe Manchin III of West Virginia and Kyrsten Sinema of Arizona, who say they support the legislation but have rejected an overhaul of the filibuster that would allow Democrats to pass the bill with votes from only their caucus.

“History will not remember them kindly,” Mr. King said, recounting his father’s criticism of the “white moderate who is more devoted to order than to justice.”

He added that Dr. King was “surrounded by people who told him to wait until a more convenient time and to use more agreeable methods.”

She added: “If you really, truly want to honor Dr. King, don’t dishonor him by using a congressional custom as an excuse for protecting our democracy.”

Cameron concluded by blandly forwarding this dishonorable attempt to suggest Republican-led state voting reforms, if not rolled back, would end in mass violence against blacks:

The King family and other activists and lawmakers recounted moments from the nation’s civil rights history to support their calls for reform and warn of what they said would be the consequences of failure: a regression of civil rights and a new generation of voters of color who will be less enfranchised than their parents. They even raised the specter of violence, like the brutality that occurred in Selma, Ala., on Bloody Sunday.

“We are once again at that precipice,” said Representative Terri A. Sewell of Alabama, a Democrat whose district includes Selma.

“This is our mountain moment,” she added. “Will we give up? Give out? Or will we keep pressing forward?”