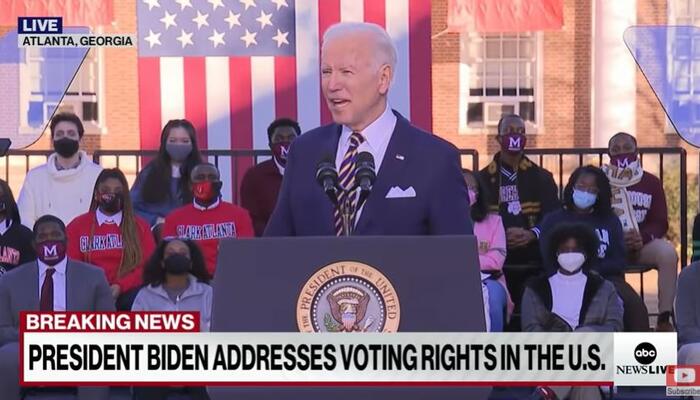 Evidently, moves by Republicans in various states to roll back pandemic-inspired loosening of the vote, such as ballot harvesting and vote drop boxes, are prima facie examples of “voter suppression” (a phrase used twice in quoted material here) that will doom the Democrats – as if an objective press would pick a side. And now the party will have to actually have to (gasp!) spend money to convince people to vote for them.

With the door slammed shut this week on federal legislation to create new protections for access to voting, Democrats face an electoral landscape in which they will need to spend heavily to register and mobilize voters if they are to overcome the hodgepodge of new voting restrictions enacted by Republicans across the country.

….Republican-controlled state legislatures have since enacted a range of measures that undo those policies, erect new barriers to voting and remove some of the guardrails that halted former President Donald J. Trump’s drive to overturn the election.

Democratic officials and activists now say they are resigned to having to spend and organize their way around the new voting restrictions — a prospect many view with hard-earned skepticism, citing the difficulty of educating masses of voters on how to comply with the new rules.

They say it would require them to compensate by spending tens or even hundreds of millions of dollars more on voter-registration and turnout programs — funds that might otherwise have gone to promoting Democratic candidates.

Times journalists write as if voting had no history before 2020: The state of Georgia evidently employed zero drop boxes in that long-ago year of 2018. Allowed under pandemic rules, they are now considered by the left to be a permanent fixture on the electoral landscape.

Republicans, whose decades-long push to curtail voting access was put into overdrive by Mr. Trump’s false claims of election fraud after his defeat, are planning a renewed push to enact new restrictions during this year’s state legislative sessions.

They are also pushing to recruit thousands of Trump supporters as election workers come November.

The bottom line, Democrats say, is that in many Republican-run states, voting in 2022 may be more difficult — and more charged — than it has been in generations, especially if the coronavirus pandemic does not subside.

….at least 12 states have passed laws preventing nongovernmental groups from financing election administration — a wide-reaching legislative response to false right-wing suspicions that $350 million donated for that purpose by another organization with ties to Mr. Zuckerberg was used to increase Democratic turnout. (The money mainly covered administrative expenses, including safety gear for poll workers, and was distributed to both Republican and Democratic jurisdictions.)

But the Associated Press story linked above doesn’t absolve Zuckerberg’s partisan activism, funneled through the Center for Tech and Civic Life. The AP itself admitted that Democratic counties in Pennsylvania and Florida, to name just two states, received vastly more funds than did Republican counties. Nothing “false” there.

Republicans, whose most avid voters remain animated by Mr. Trump’s false stolen-election claims, have had no such trouble recruiting election workers….Urging rank-and-file Republicans to work as poll watchers plays on their fears of voter fraud and helps reinforce party loyalty, G.O.P. officials say.