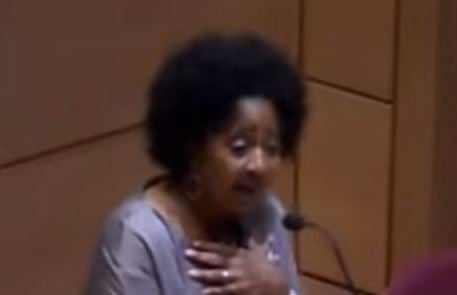 Obama Judge Linda Parker ignored Trump’s case on the integrity of the 2020 Election in Michigan raised by attorney Sidney Powell.   It’s not clear if she ever looked at it. Then Judge Judge Linda V. Parker threw the case out last December.  There were over 100 legal affidavits from Michigan citizens alleging fraud in the 2020 election received in Michigan.

The Gateway Pundit recorded numerous riveting testimonials after the election from Michigan election workers who witnessed what they perceived were fraudulent acts during the election last November.

The judge’s opinion was a disgrace and it’s possible she didn’t even review the data from Powell supplied in the case.
She couldn’t have reviewed Powell’s support to come up with her judgment.

Judge Parker then ordered attorneys Sidney Powell and Lin Wood be punished for daring to bring the case to court that she threw out.
Democrat tyrants will not allow dissent or challenges.

On Friday Judge Linda Parker charged Sidney Powell and eight other attorneys $175,000 for daring to bring the lawsuit against the Michigan election.
Again – dissent will not be allowed.

Judge Parker argued that Sidney Powell collected donations so she should be able to pay her fine.

Nine lawyers allied with former President Donald Trump were ordered Thursday to pay Detroit and Michigan a total of $175,000 in sanctions for abusing the court system with a sham lawsuit challenging the 2020 election results.

The money, which must be paid within 30 days, will cover the legal costs of defending against the suit, which were more than $153,000 for the city and nearly $22,000 for the state.

U.S. District Judge Linda Parker, who agreed to impose sanctions in August in a scathing opinion, rejected most of the attorneys’ objections to Detroit’s proposed award, but she did reduce it by about $29,000. Those sanctioned include Sidney Powell, L. Lin Wood and seven other lawyers who were part of the lawsuit filed on behalf of six Republican voters after Joe Biden’s 154,000-vote victory over Trump.

“Plaintiffs’ attorneys, many of whom seek donations from the public to fund lawsuits like this one … have the ability to pay this sanction,” Parker wrote.