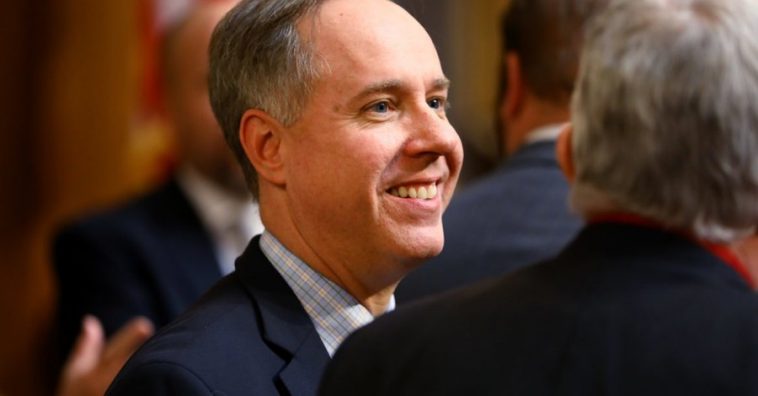 Wisconsin Speaker Robin Vos promised a year ago that he would get to the bottom of the election fraud in his state.  But to date, nothing has been done.  No arrests, no indictments, no turning over the corrupt certified results in the election, nothing.  We do know why.

We wrote a post in July listing the many times Speaker Vos said he would get to the bottom of the 2020 Election fraud in his state.  But nothing got done.  We blamed this on the fact that Vos is very close with former US Speaker Paul Ryan – a RINO never-Trumper who follows his former running mate Mitt Romney in doing all they can to stop President Trump.

This relationship between Vos and Ryan certainly helps Vos justify his lack of integrity in demanding the truth be uncovered in Wisconsin.  After all, we know that the election worker in Milwaukee laughed at her misdeeds in Milwaukee on election night.  This is the same area where over 143,000 votes were dropped for Joe Biden only which gave Biden the state lead.

The Election worker, Claire Woodall-Vogg received an email from a member of the far-left ‘non-profit’ “The Elections Group” which said:

Damn, Claire, you have a flair for drama, delivering just the margin needed at 3:00 am.  I bet you had those votes counted at midnight, and just wanted to keep the world waiting.”

Clearly, there was something terribly unjust going on a year ago on Election Night in Wisconsin but Speaker Vos has done nothing to demand the crimes be uncovered and accounted for.

This is because Vos was in on part of the corruption.  We learned Vos signed the agreement with Hillary’s attorney Marc Elias validating the drop boxes in the state even though he didn’t have the constitutional right to do so.  This was something that the legislature needed to vote on and Vos likely knew that.

One year later, the reason the corrupt results were certified in Wisconsin and have not been overturned is because of Speaker Robin Vos.