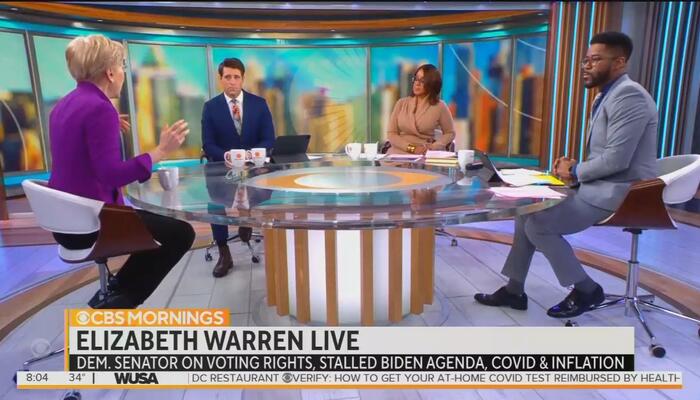 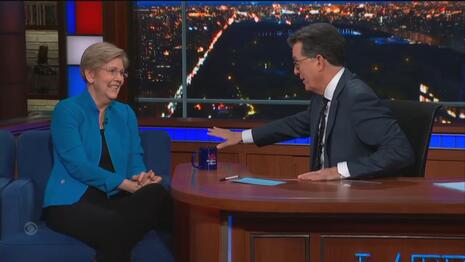 CBS News and Senator Elizabeth Warren (D-MA) spent Monday night and Tuesday morning in open partnership and joined at the hip, strategizing over the course of 23 minutes a path forward on their so-called voting rights agenda, axing the filibuster, primarying Democrats who diagree with them, spewing lies about conservatives, and even permanently eliminating the “anti-Democratic” Senate.

First up, The Late Show with the horribly unfunny Stephen Colbert. Boasting “it’s always a shot in the arm to have you here,” he invited her to explain “how did we get back here that we need” voting rights protections considering, back in 1957, “Martin Luther King Jr. called voter restrictions” (as in actual ones) “a tragic betrayal of the highest mandates of our democratic tradition.”

Warren painted a cartoonish scene, a arguing voting in America was largely untouched and bipartisan until 2013 with the Shelby County v. Holder decision.

Putting aside how, as we’ve pointed out, this entire premise is a lie, she added that “Republican state legislatures…are trying to outdo each other to keep people of color” and “college students from voting” while stealing elections through means like gerrymandering (even though Warren’s state has a 9-0 Democratic House delegation).

Before a break, Colbert demanded to know why Democrats didn’t first focus on voting (versus, say, COVID-19): “[V]oting rights has to be first…because everything else you want to do is for naught…[T]here won’t be actual representation of the American people if these voting rights restrictions go through. Why is it fourth or fifth. Why is it where it is?”

Two Warren meltdowns and a break later, Colbert compared our current time to that of the mid-1960s when things like Blood Sunday took place and if more violence will happen before things change: “Are things going to have to get much worse before they get any better? What is going to break, in your opinion, this moral failing, this deadlock?”

Colbert then straight up asked whether Warren would eliminate the filibuster, which led her to not only say she would, but falsely claim doing so would be the true way to honor the vision of the Founders by going to a government run by “majority rule.”

In the final block, Colbert went down the terrifying road of insisting that, if Democrats don’t get their way, the Senate should be killed because it’s “the most anti-Democratic institution next to the judiciary” and he doesn’t “understand what possible, positive purpose [it] provides” (click “expand”):

COLBERT: Hey, everybody! We’re back here with Senator Elizabeth Warren. If you can’t get rid of the filibuster, what about — and just hear me out and try to hear this objectively.

WARREN: Because the Senate —

COLBERT: — the way it is. No one would drop a single tear — you’ve already got tenure, you can go back to your other job. You’ll be fine, spend more time with Bailey and Bruce, okay?

WARREN: I have [INAUDIBLE]

WARREN: I put my money on the democracy. [APPLAUSE] If they have a majority —

COLBERT: 41 million Americans are represented more by — by your side than the Republicans and, yet, they could get one more vote.

Things didn’t get any more adversarial on Tuesday’s CBS Mornings.

“Look who’s in our green room. It’s Democratic Senator Elizabeth Warren. She’s here to talk about the roadblocks standing in the way of President Biden’s agenda. We have questions and she has answers,” boasted co-host Nate Burleson in a tease.

In another tease, co-host and Democratic donor Gayle King peddled Warren’s false claim about “democracy” being “on the line.”

Co-host Tony Dokoupil did open by citing Biden’s low poll numbers and wanted to see if she agreed “voting rights legislation…is dead without” Manchin and Sinema.

Warren peddled her lie about the GOP “keep[ing] people from voting,” but Dokoupil and his cohorts plowed ahead.

After he followed up by asking if she thought Sinema “[had] a point” that eliminating the filibuster would worsen the partisan divide, King expressed frustration their team wasn’t successful (click “expand”):

KING: But after a while, senator, people don’t even hear you now. It just seems like a lot of screaming and hollering and na, na, na, na. I mean, Senator Sinema and Senator Manchin are also making it difficult for the Build Back Better plan.

KING: So how do you move past this roadblock? I know you all are very optimistic and say you can’t give up hope, but after a while when does reality set in and we need to go in a different direction?

WARREN: Where were we a year ago today? We were still mopping up blood and sweeping up glass in the United States Capitol.

WARREN: We had an armed insurrection.

WARREN: If you haven’t, they work, but we also passed a rescue package.

King pivoted to offering constructive criticism, offering Warren the option to “break [Build Back Better] up so you can get something accomplished” with Dokoupil suggesting the child tax credit be one possible option.

Burleson worked his way in, asking about primarying Manchin and Sinema with Dokoupil wondering what they’ll do with likely only a year left in control of Congress (click “expand”):

BURLESON: In — in 2024, should Manchin and Sinema be primaried?

WARREN: We’ll address that when we get past this week.

BURLESON: Okay. Let me ask you about 2024. Do you believe that President Biden is up for the job?

WARREN: President Biden is running for re-election. I expect to support him.

KING: His approval ratings are some of the lowest that they’ve been for a very long time.

WARREN: I — I understand that. But remember, we’ve just finished the first quarter. We’re just starting into the second quarter here, so we’ve got a lot of time, a lot of work in front of us.

DOKOUPIL: But you only have probably less than a year —

DOKOUPIL: — before you lose both the Senate and the House.

DOKOUPIL: All the polls —

DOKOUPIL: — the polls are very, very bad, right? Gallup had a poll that showed a preference nationally for Republicans at a five-point margin over Democrats.

DOKOUPIL: You started the year with the insurrection and a nine-point advantage. Now, in the fourth quarter, it was a five-point advantage to the Republicans, so something’s not right here.

“[W]hy doesn’t the stuff get done? If you look at the polling, the individual ideas from the Democratic Party…are very popular. Then you look at Democrats and often they are not popular,” Dokoupil later added.

Headed into a local weather break, Burleson thanked Warren for her “passion” and “for continuing to fight.”

CBS’s support for gaslighting, lies told to, and radicalization of their liberal base was made possible thanks to the endorsement of advertisers such as Amazon, Colgate, Hyundai, and Progressive. Follow the links to see their contact information at the MRC’s Conservatives Fight Back page.

To see the relevant CBS transcripts from January 18, click here and here.