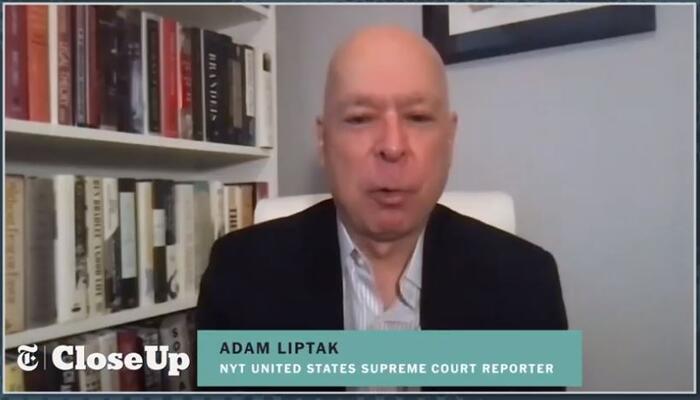 Adam Liptak, Supreme Court reporter for the New York Times, sent up a warning flare for the right-leaning Supreme Court: Don’t mess with Roe v. Wade. His Sunday analysis, “As Roe Teeters, Belief in Court Could Tilt, Too” suggested the Court’s credibility was again (conveniently) at stake. The online headline: “Critical Moment for Roe, and the Supreme Court’s Legitimacy.“

Donald J. Trump, who appointed three Supreme Court justices while president, vowed that they would help overturn Roe v. Wade, the 1973 decision that established a constitutional right to abortion. In arguments on Wednesday, there were more than a few signs that Mr. Trump had succeeded.

The court’s three Democratic-appointed justices, sounding anguished and angry, said that overruling Roe soon after a bare-knuckled political campaign to change the court’s membership would represent a tipping point, one from which the court’s legitimacy could not recover.

Liptak seemed to agree. He employed pretzel logic to justify keeping the legally indefensible Roe decision just as it is:

The case illuminates competing and shifting conceptions of the role of the court. For decades, conservatives have argued that Roe amounted to judicial activism, announcing a right not found in the Constitution and overriding the political process to achieve an outcome that politicians would not.

Now, after nearly half a century in which that right has been woven into the societal fabric, the argument may have come full circle, with many liberals saying that a decision by the court to eliminate the right to abortion would amount to flagrant political activism.

Liptak argued that liberal justices were merited in their concern.

Recent polls — taken after the court allowed a Texas law that bans abortions after six weeks to take effect in September, but before Wednesday’s arguments — suggest that Justices Sotomayor and Breyer were right to worry about the court’s standing.

Liptak then dug up three polls to back his liberal interpretation.

To his partial credit, Liptak let a rare dissenting professor voice have the last word.

Professor [Nicole] Garnett said the court should act for itself in the Mississippi case — by overruling Roe.

“When the court straightforwardly upholds the Constitution and stays within its proper role, despite the possibility of negative publicity, as it did in Brown v. Board of Education, its legitimacy is reinforced,” she said. “A negative reaction does not mean that the court has done something illegitimate. It may mean the opposite.”

In December 2018, according to Liptak, the newly right-leaning Court was heading into a “dangerous time” for its “legitimacy.”

Yet decades of justices making “progressive” rulings that furthered the liberal agenda without Democrats having to mess with passing actual legislation, hadn’t made a dent in the Court’s reputation. Funny how that works.

P.S. Saturday’s paper hosted a screed on the same topic by the paper’s former Supreme Court reporter, Linda Greenhouse. The online headline was astringent: “The Supreme Court Gaslights Its Way to the End of Roe.”

Greenhouse, who marched for abortion in 1989 while a Times reporter and is obsessed with the topic, was especially concerned about Justice Brett Kavanaugh.

More gaslighting: The superficial plausibility of Justice Kavanaugh’s analogy between Plessy v. Ferguson and Roe v. Wade dissolves with a second’s contemplation. For one thing, Plessy negated individual liberty, while Roe expanded it….