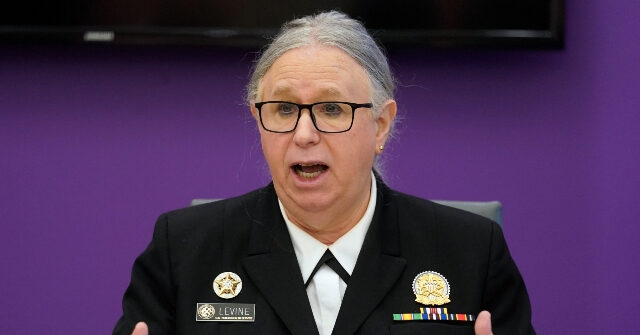 The Biden Administration’s Assistant Secretary for Health Rachel Levine called on doctors to serve as “ambassadors” in the attempt to normalize transgenderism.

Levine, a man who identifies as a woman, remarked “I encourage all of you to think of yourself as ambassadors to your communities, ambassadors for science,” as well as for “compassion” and for “care.”

“I believe in our role as truth-tellers. And the truth that we need to confront now is that medicine and science are being politically perverted.” pic.twitter.com/FbBFK450WR

“These conversations don’t need to be limited or restricted to a medical setting,” Levine added.

“Offer yourselves as informational resources not just for youth but for school teachers, principals, school boards, professional organizations, recreation centers, county commissioners, and others who would benefit from this information and your perspective,” Levine noted. He added, “Please proactively seek out opportunities to speak about what you know.”

Levine went on to say, “We need to have these conversations that question the assumptions that are underlying today’s attacks on trans people. Pushing back the veil of ignorance demands this extra effort.”

“Medicine and science are being politically perverted around this country,” the Biden administration official said, adding, “we have reached a tipping point … for the health and wellbeing of LGBTQI+ youth and other Americans.”

He went on to say, “They are rejecting … well established science, and simply rejecting basic human compassion.”

Levine also said that we need to “confront the fact that the language of care and compassion that they’re using” serves to “tear our communities apart.”

Breitbart News reported that email correspondence from Levine to Nadia Dowshen, the co-founder and co-director of the Gender and Sexuality Development Clinic at the Children’s Hospital of Philadelphia, revealed that children under the age of 18 had undergone irreversible sex change operations with no scientific backing.

Spencer Lindquist is a reporter for Breitbart News. Follow him on Twitter @SpencerLndqst and reach out at slindquist@breitbart.com