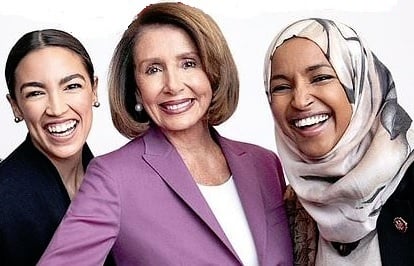 In an interview with CNN’s Jake Tapper on Sunday, terrorist sympathizer Rep. Ilhan Omar (D-MN) said that Lauren Boebert (R-CO) deserves to be punished by Congress for a recent joke and for labeling Omar a member of the “Jihad Squad.”

The radical congresswoman directly called on House leadership to strip Boebert of her committee assignments, saying how she is “very confident” that Pelosi will hold an official vote on the matter by next week.

“We should punish and sanction Boebert by stripping her of her committees, by rebuking her language. By doing everything we can to send a clear and decisive message to the American public that if the Republicans are not going to be adults and condemn this, that we are going to do that [punish them].

I’ve had a conversation with the speaker and I’m very confident that she will take decisive action next week.”

When Pelosi introduces this for a vote on the House floor, it is almost certain that Boebert would be kicked off her committees.

The Democrats have a substantial majority in Congress already, and that is before you even factor in the RINOs like Nancy Mace who immediately jumped to condemn Boebert’s comments.

Boebert had even reached out to Omar to apologize, but it did not go over well – apologies never do with the woke.

After tweeting an apology to the Muslim community for any offense she may have caused, even though it had nothing to do with Muslims in general, Boebert called Omar and was met with demands for a public apology before she was hung up on.

Boebert ended up telling Omar that she was the one who should apologize publicly for her anti-American rhetoric and terrorist sympathizing.

The America first congresswoman is not backing down, challenging Omar to go on air with her and have a proper discussion, but she has gotten no response.

“The country is tired of Ilhan Omar deflecting from her anti-American, anti-Semitic, anti-police, bulcrap.

Instead of Running off to Speaker pelosi, Ilhan Omar should accept the Fox News offer to meet me on air and debate our differences.”

If Boebert is censured, she will become the third America first Congress member to lose their assignments in the past few weeks, joining Marjorie Taylor Greene (R-GA) and Paul Gosar (R-AZ).

Translation: memes, jokes, or truth that isn’t approved are off-limits – even for elected officials. This is the conservative purge.

The Democrats are making the most out of their majority and have been moving at an unprecedented pace to silence Republican Congress members who do not play along. Meanwhile, heinous crimes that have been committed by Democrat lawmakers are religiously ignored and swept under the rug by Pelosi.

Several prominent Democrat representatives are sitting on foreign intelligence committees despite their flagrant corruption – one was even caught sleeping with the enemy, but he still has access to classified information that is only allowed to be disclosed to certain members of Congress.

In reality, this isn’t about the memes or the jokes – It’s about these brave America first officials who are speaking truth to power. The paper-tiger Democrats have nothing left but to completely silence the dissent in any way they can.

Boebert dropping a bomb on the house floor as she did during the vote to censure Gosar was likely what turned the woke ire on her, the joke was just the perfect outrage fuel to justify it.