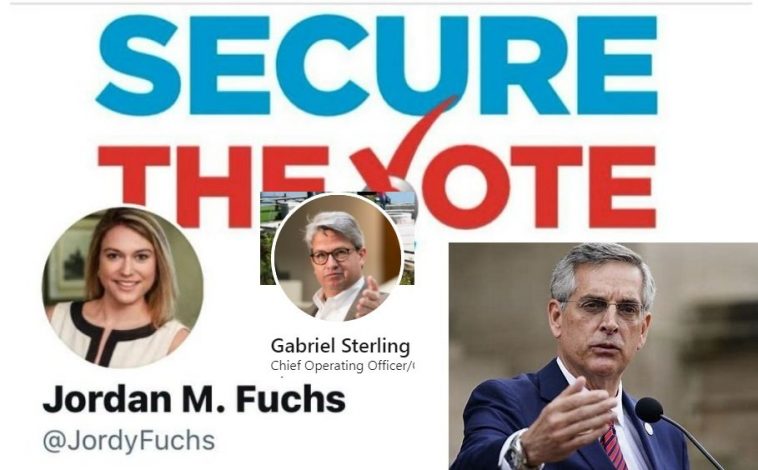 In July we reported that Georgia’s corrupt Secretary of State Raffensperger, his corrupt CFO Sterling, and his corrupt deputy secretary of state Fuchs weren’t upset about Democrat election wins in Georgia, they wanted it that way.  Instead, they slandered President Trump for calling out obvious fraud in their state.

A report at the Georgia Record this weekend uncovered the many connections between top Republicans in Georgia who were connected to a firm that groomed Democrats for Republican jobs.  No wonder these individuals did all they could to prevent President Trump from winning reelection.

Landmark Communications of Atlanta, GA bills itself as the ‘go to’ firm for GOP candidates to get elected in Georgia.

The founder, Mark Roundtree, says this about himself on Landmark’s website:

Mark Rountree is President of Landmark Communications, Inc., which he founded in 1991.

Campaigns & Elections Magazine has recognized Mark as one of Georgia’s five “Top Influencers” as well as “the go-to man for GOP legislative candidates.”

Unfortunately, Landmark has a history of helping Democrats get elected running as Republicans. This phenomenon may have contributed to the absolute cesspool of corruption in the Peach State when it comes to the performance of Republican officials during the 2020 election cycle. Some of these candidates have ties to the Chinese Communist Party.

We believe there has been a concerted effort among Democrat operatives to do just that – infiltrate the GOP and run ‘progressives’ as Republicans, who are lying about their beliefs and views on the issues. All of the information below is from publicly available information.

The report lists Asian American Nazeera Dawood as an individual who lost her race where she billed herself as a fiscally conservative Republican but lost after a picture of her was found on the Net where she attended a far-left gathering labeled, tacos, beer, and abortions”  It was then found out that she wasn’t a doctor as she claimed either. GA Secretary of State Brad Raffensperger was also represented by Landmark during his elections. This morning GA SoS Candidate David Belle Isle released data on Democrat contributions to Raffensperger’s campaign. The behavior of Raffensperger since Nov 3rd has been bizarre for a Republican to say the least. More to come on that in another article.

According to David Belle Isle, around 20% of Raffensperger’s donations came from out-of-state Democrats.

Landmark also represented Taiwanese immigrant ‘Jay Lin’ (not his Asian name) in his race for JC City Council, and follow-on race for a GA state representative seat. We have written extensively about Jay Lin here. Jay Lin somehow made it onto Governor Brian Kemp’s transition team and was appointed to at least three other government board positions in GA, including one with influence over the Savannah Port.

Jay Lin also ran as a conservative in JC. However, he had a reputation of not showing up for meetings, not paying attention, and voting opposite of Republican views. Jay Lin and Nazeera Dawood held political events together as they both ran for JC City Council in 2015.

Brad Raffensperger is on record saying he had to support Jay Lin because he owed the Chinese community for his previous election and fundraising. The man below next to Brad Raffensperger is Yale Xiao. Yale was Jay Lin’s campaign manger. On Chinese social sites his nickname is ‘Old Money’.

In addition to the individuals listed in the Georgia Record piece, we identified another crooked so-called Republican connected to Landmark Communications.  On the LinkedIn portfolio of Mark Rountree, the President of Landmark Communications, Gabe Sterling endorses Rountree for his work with ‘political campaigns’.

Looking a bit further we noticed that Sterling was a Vice President at Landmark Communications in 2005. Of course, Sterling is the pudgy guy the Secretary of State’s Office sent out to meet the media while the state was being stolen from President Trump and moved to Joe Biden.

Lumberjack Logic dissected the Georgia Record paper in an excellent presentation on YouTube.

Of course, Democrats ran as Republicans, they lie all day long.  They’ll do anything for power.