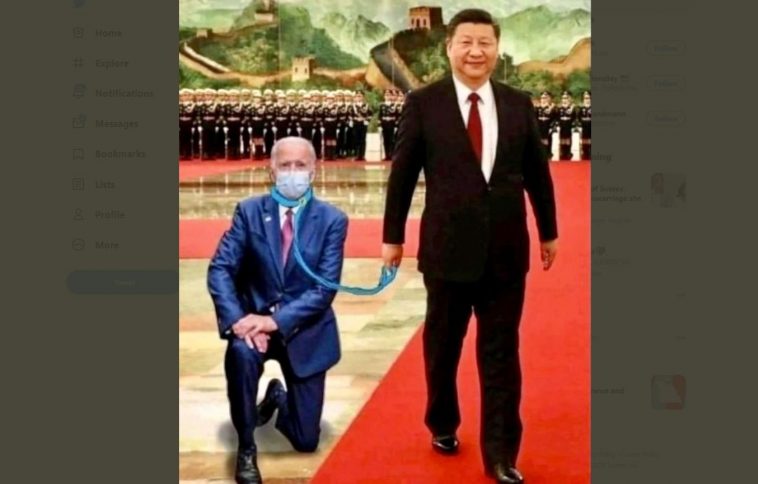 Last week, the White House reportedly cut the live video feed of Taiwan’s digital minister during Biden’s Summit for Democracy after the official had displayed a map that depicted Taiwan in a different color than China.

The differentiation of Taiwan as its own independent country would enrage the genocidal dictator of China, so naturally, Biden’s administration scrambled to quickly censor the speaker in order to appease their Communist overlords.

Sorry, Taiwan – under Biden, democracy goes to the highest bidder.

According to Reuters, who spoke with multiple “sources familiar with the matter,” US officials “caused consternation” and panic when Taiwanese Digital Minister Audrey Tang showed the image during her slide show presentation, which caused them to cut the video feed and replace it with an audio-only stream for the rest of the summit.

When the moderator returned to Tang a few minutes after showing the map, the video stream was replaced with a screenshot captioned: “Minister Audrey Tang Taiwan.” An onscreen disclaimer also declared: “Any opinions expressed by individuals on this panel are those of the individual, and do not necessarily reflect the views of the United States government.”

Apparently, depicting Taiwan as its own nation (it is) would be contradictory to Biden’s “one-China” policy, which he claims is a policy that avoids taking a position on Taiwan’s independence, but in reality, is just Communist China’s longstanding, authoritarian dictate that Biden has shamelessly sold-out to.

“The sources, who did not want to be identified due to the sensitivity of the matter, said the video feed showing Tang was cut during a panel discussion and replaced with audio only – at the behest of the White House.

The White House was concerned that differentiating Taiwan and China on a map in a U.S.-hosted conference – to which Taiwan had been invited in a show of support at a time when it is under intense pressure from Beijing – could be seen as being at odds with Washington’s ‘one-China’ policy, which avoids taking a position as to whether Taiwan is part of China, the sources said.

A second source directly involved in the summit said the video booth operator acted on White House instructions. ‘It was clearly policy concerns,’ the source said, adding: ‘This was completely an internal overreaction.’

The sources saw the move during a panel on “countering digital authoritarianism” as at odds with the summit’s mission of bolstering democracy in the face of challenges from China and others. They also said it could signal that the administration’s support for Taiwan was not as “rock solid” as it has repeatedly stated.

‘They choked,’ the source said of the White House reaction.”

Biden’s State Department claimed that “confusion” over screen sharing was to blame for Taiwan’s video feed being cut, calling it an “honest mistake,” even though several officials confirmed otherwise and their actions during the event seem to contradict their claims.

Taiwanese officials were also upset about the feed being censored, according to Reuters.

Despite all of this, a spokesperson for the National Security Council denies the White House had any involvement and claims that the reports are “inaccurate.”

“At no time did the White House direct that Minister Tang’s video feed be cut,” the spokesman said in an email, also blaming it on confusion over screen-sharing and adding that the full video could be viewed on the summit web page.”

Tang’s video feed is also censored in the full version on the summit webpage.

Here is the video:

“We believe that a completely open environment with free speech uncensored is perfect for letting digital democracy flourish.”