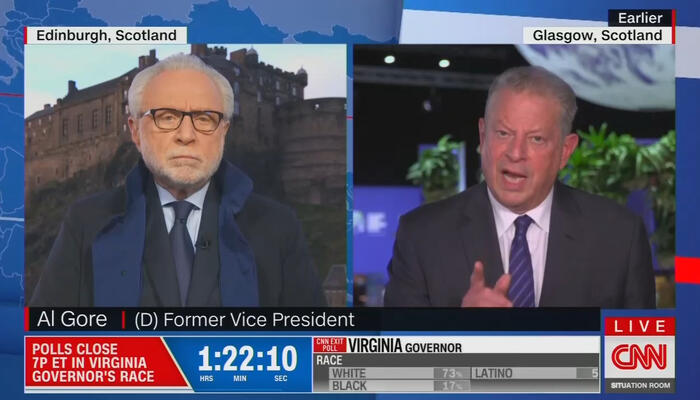 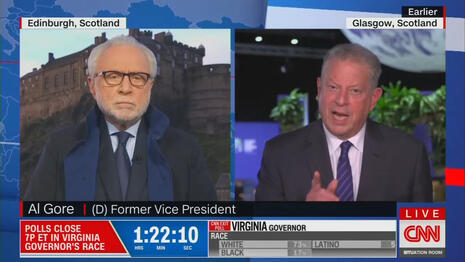 Gore went on the Nov. 2 edition of CNN’s Situation Room as anchor Wolf Blitzer fawned over how the climate-crusading Democrat “famously raised the alarm about climate change with your documentary, An Inconvenient Truth.” Blitzer painted Gore as some sort of climate seer by sensationalizing rising temperatures: “Since then, global temperatures have risen on a steep curve.”

Blitzer proceeded to push alarmism: “How critical is it for world leaders to deliver results at this COP-26 summit before it’s too late?” Blitzer questioned Gore whether reaching the goals of the economically disastrous Paris Climate Accords was in reach, even though global emissions would “need to be cut seven times faster than current commitments” call for, according to a UN report. Gore responded in the affirmative: “That goal is still within reach.” Blitzer asked how this was possible when top emitters like China “aren’t even attending the summit and aren’t really stepping up with commitments.”

Gore offered cover for the communist state of China, slobbering over how Chinese President Xi Jinping “made a very significant commitment to end all of China’s financing of overseas coal plants, and they were building 72 percent of them. So that’s a major commitment.” He continued: “[Xi] also made a commitment, almost a year ago, to reach net zero.” A May report from BBC illustrated how ridiculous Gore’s pro-China propaganda is: “Report: China emissions exceed all developed nations combined.”

JunkScience.com founder Steve Milloy rebuked Gore for treating China’s “commitment” as if it was real in comments to MRC Business. “This is all pure Chinese propaganda,” Milloy stated. “So far China has not stopped funding any coal plants anywhere, and its 2030 and 2060 pledges are about as reliable as China’s broken promises to allow Hong Kong to remain free and autonomous,” Milloy continued.

Milloy blew apart the gaslighting by Gore by emphasizing the deception behind China’s attempt at “greening” its economy:

China’s main goal is to be the world’s lone global superpower by 2049. Toward that end, China is happy to sit by, burn as much coal as it can and watch the US and Europe destroy themselves with climate idiocy. As Communist China is the 21st Century’s Nazi Germany, that Al Gore would give credence to any of this is appalling[ly] naïve at best and a betrayal of America at worst.

Conservatives are under attack. Contact CNN at 1-(404)-827-1500 and demand it stop propping up Gore’s pro-China propaganda.