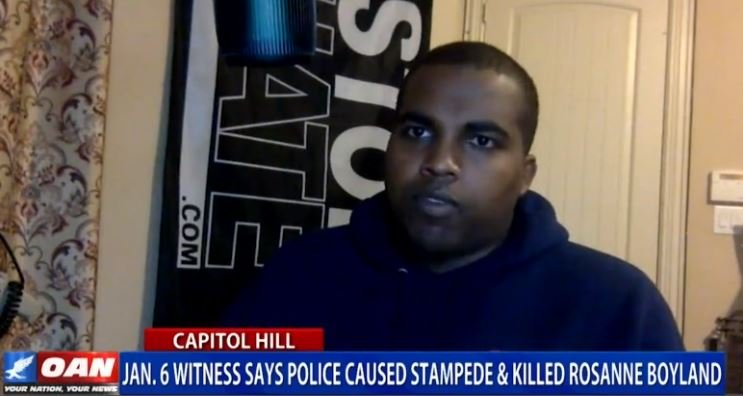 Philip Anderson was a victim of police brutality on January 6th and is speaking out about the horrific abuse by the US Capitol Police. Anderson is lucky to be alive today. He was dragged from under a pile of bodies when the police viciously sprayed Trump supporters with an unknown liquid and then continued to push them on top of eachother. Philip Anderson was knocked unconscious and dragged from the pile. Rosanne Boyland was not so fortunate and died that day due to police brutality. Christina Bobb: Philip Anderson, a free speech advocate, says the police showed no regard for human life and ultimately caused the death of Rosanne Boyland.

Philip Anderson: After the police gassed us, everyone turned around to run away but people, our bodies turned limp, we all fell fdown on top of eachother. And the police kept pushing more and more people on top of us. And they used mace, they used batons to beat us, their fists. If they were just swinging their fists at people who were getting too rowdy, I don’t have a problem with that but they literally did not care if they killed us…

Christina Bobb: The police continued to beat and push the people on the steps of the Capitol even knowing that some were suffocating at the bottom of the pile. Anderson was pushed down next to Rosanne Boyland and held her hand thinking they would both die.

Philip Anderson: After we both fell down all these people fell on top of us about 30 people. So we’re both being crushed to death. She grabbed, she reaches out and grabs my hand. She was holding my hand for a little while and then she lets go. And at that moment I’m thinking I’m about to die too. So I started yelling as loud as I can. And after I keep yelling and yelling for minutes, because this wasn’t something that happened quickly. And this is why I have a real problem with Capitol Police… People begging… I’m going to die… I can feel my bones being crushed. They continued to push more people on top.

Philip goes on to describe how several men pulled him to safety. Those same men are sitting in the DC Gulag today.

Watch this entire riveting interview below.