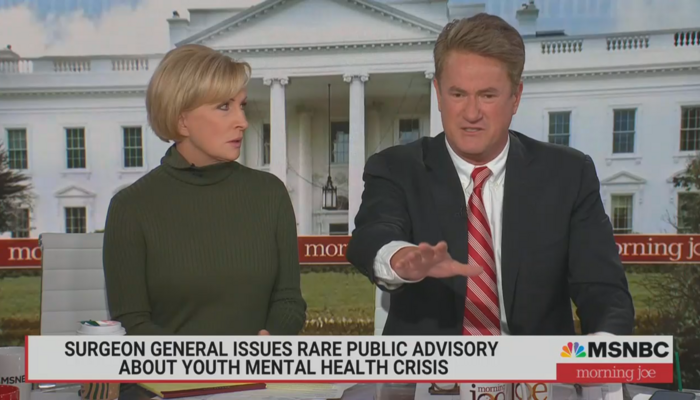 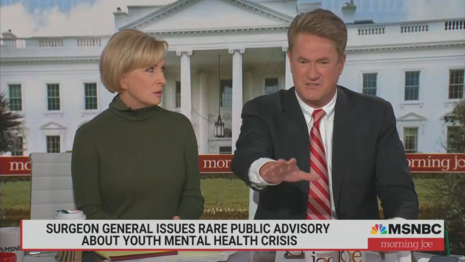 He and the panel were reacting to two items in the news: the testimony of Instagram’s CEO yesterday before a Senate committee, and an advisory from the Surgeon General warning about a mental health crisis among young people.

Scarborough’s solution was to permit class-action lawsuits against social media companies like Instagram for the harm they do, in the same way that tobacco companies and airplane manufacturers have been held liable. They apparently have caused an “epidemic of teenage depression, anxiety, suicidal ideations.”

At one point, calling himself a free-market conservative, Scarborough went on an angry, finger-pointing rant against Republicans, telling them “spare me–it’s called the free market!” Chopping the air with his hand, he declared, “we need to make Silicon Valley answer for their misdeeds.”

In particular, Scarborough called for class action suits by parents that would cost the companies billions, and ultimately threaten bankruptcy. That would force them, said Scarborough, to change their algorithms. He called for Section 230 to be amended to permit such suits. As it stands, Section 230 generally provides immunity from liability for online publishers of material provided by third-party users.

MIKA BRZEZINSKI: The Surgeon General’s advisory adds to a growing number of calls for attention and action around adolescent mental health, and calls on social media companies to do more.

JOE SCARBOROUGH: The epidemic of teenage depression, anxiety, suicidal ideations, all the things that were being driven, [Mika sighs] if you talk to people that are at schools or run schools, by social media, by Instagram, and the pandemic just made a bad situation worse. And it’s a situation we have to come to terms with.

MIKA: Why are we putting up with this? Why does this continue?

SCARBOROUGH: It’s a really good question. What can be done, Katty —

MIKA: I’d shut it down in a second.

SCARBOROUGH: I am a conservative, I’m a free market conservative, and I believe you let the market operate. And one of the ways that the market is supposed to operate is, people that build products, make products that hurt people, that kill people, are liable for those products. Unless, of course, you’re in Silicon Valley.
. . .

Let me tell you, because if you keep doing this, you are going to bankrupt the company. See: we don’t know how to fix this, because we don’t understand the algorithms. They do. And the second they’re liable, and the second parents from across America can put out a class-action lawsuit —

If they kill young girls, they pay billions of dollars in class-action lawsuits, and then they, not us will figure out how to fix it.