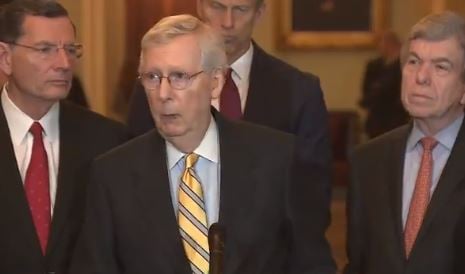 The Senate Thursday voted to advance a deal negotiated by Senate Minority Leader Mitch McConnell and Senate Majority Leader Chuck Schumer that would allow the Democrats to raise the debt ceiling with a simple majority in the senate.

House Democrats on Tuesday evening passed a bill that would set up a process for a debt ceiling hike with a simple majority vote in the Senate.

This fast-track procedure that includes Medicare legislation will expire by January 16 and can only be used one time.

The bill passed the House 222-212 – with RINO Kinzinger being the only Republican to join with the Democrats.

The Senate Thursday morning voted 64-36 on a motion to invoke cloture on the motion to concur in the House Amendment to S.610.

Invoked, 64-36: Motion to invoke cloture on the motion to concur in the House amendment to S.610.

Here are the 14 Republicans who voted on the motion to invoke cloture which would allow the Democrats to raise the debt ceiling with no upper limit (blank check):

The Senate later Thursday afternoon passed the debt ceiling provision in a 59-35 vote.

The legislation will head to Joe Biden’s desk for a signature.

Here are the Republicans who voted “yea” on the provision: