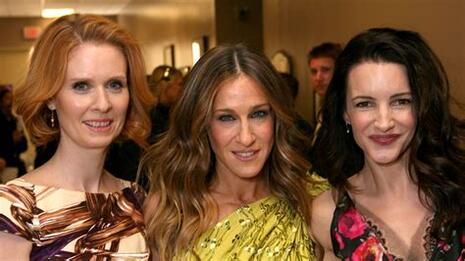 The sequel to Sex and the City is here. HBO Max began streaming the first two episodes of And Just Like That… on December 9. Fast forward twenty years and we find three of the four ladies struggling with middle age, major loss, and teenage children.

Samantha (Kim Cattrall) is missing from the group of four. Her absence is explained by a move to London for her job. Carrie Bradshaw (Sarah Jessica Parker), Charlotte York (Kristin Davis), and Miranda Hobbs (Cynthia Nixon) are left to continue the story. What jumps out of the stories of each woman is that Miranda is becoming almost a parody of a woman riddled with liberal white guilt.

In Episode One, “Hello It’s Me”, Miranda goes back to school for a Masters in Human Rights to go with her degree in law. Her professor, Dr. Nya Wallace (Karen Pittman), is a black woman and Miranda makes a fool of herself trying to prove how woke she is to her.

Dr. Wallace: I am the professor.

Dr. Wallace: Yes. Why do you seem so surprised?

Dr. Wallace: A law professor can’t have hair like mine? Why is that?

Miranda: Oh, no, no, no. I didn’t, I didn’t mean because of the braids. I was, I was– I, I was just thrown because the braids are, are so different than the hair in your photo on the Columbia website. My comment had nothing whatsoever to do with it being a Black hairstyle. I, I knew that you were Black when I signed up for this class. Uh, that was important to me.

Dr. Wallace: You signed up for this class because I’m Black?

Miranda: Well, not just because you’re Black. I picked this class because… you’re such a force in academia on top of everything you do as a community activist. God, I sound like such a brown- nose. I mean, um… please just forget that I ever said anything about your hair. Hair has… nothing whatsoever to do with, uh, appropriateness, or intelligence, or gravitas, obviously. I mean, do I look like someone who attaches any significance to hair? I, I let mine go gray, and I don’t care if it makes me look old. Not that I’m ageist. Do I sound ageist?

Dr. Wallace: You really want me to answer that question?

Miranda: I am so sorry for taking everyone’s time. This is not at all who I am. I will just be quiet now.

Later, as Miranda runs into the professor in the subway station, Miranda explains she has just left a thirty-year career in corporate law because she “couldn’t be a part of the problem anymore.” She says, “I was at home watching CNN when the Muslim ban was initiated and I saw all those attorneys out at the airport offering assistance, and then the next thing I knew, I was in a cab on the way to JFK.” She wanted to “do something, anything, because, you know, my wearing a pink pussy hat just wasn’t cutting it.” Her Trump-derangement shows as she repeats the trope of a Muslim ban, which broadened restrictions the Obama administration put in place, and she notes the silliness of the pink pussy hats that came into fashion with The Resistance to Donald Trump’s election.

Carrie’s career still involves writing. She’s writing books now and, since this is 2021, she is doing a podcast. The host of the podcast is Che Diaz (Sara Ramirez). I know, I thought Che was a nod to Che Guevara, but it is short for Cheryl. “Do I look like a Cheryl?” the self-described “queer, non-binary, Mexican, Irish diva” asks.

Episode Two, “Little Black Dress” starts off with Miranda’s teenage son and his girlfriend having sex in his room. Miranda and her husband, Steve, allow her to sleep at their house with him. How progressive of them. In the first episode, Miranda even tells the ladies that she stepped on a used condom in his room with her bare feet one morning. Eww.

This episode includes a scene where Miranda overreacts and all but accuses a security guard checking IDs at Columbia Law School of being racist for not allowing Dr. Wallace through without showing hers.

Dr. Wallace:  I, I just need to find my ID. It’s in here somewhere. It’ll just be a second. Sorry, sorry.

Guard: Please step to the side until you do.

Miranda: Uh, hello. This is Professor Nya Wallace. She teaches law here. You can let her through.

Guard: Not without an ID I can’t.

Miranda: I, I don’t understand why you’re questioning her identity.

Guard: I’m not questioning her identity. I’m waitin’ for her to show me her ID.

Miranda: Well, it’s interesting because you barely glanced at mine when I went through. Could I have your name?

Guard: Thank you. Come on through, Professor Wallace.

Miranda: Hi. I just had to say something.

Dr. Wallace: Did you?

Dr. Wallace: Did you have to say something?

Miranda: Oh… one of the important takeaways I got from how to be an anti- racist is if you see something you have to speak on it. You have to call it out.

Dr. Wallace: Well, that’s very noble of you, even if a tad bit white savior complex, but the reality is you just inflamed a situation that was perfectly fine. He needed to see my ID. It was somewhere in my bag. This isn’t “To Kill a Mockingbird.” I don’t need a good- hearted lawyer to defend me.

Dr. Wallace: I appreciate it, but it’s not necessary to apologize.

The guard isn’t hassling black people, he is doing his job.

Will Miranda learn to breathe and not jump to rescue Dr. Wallace at every turn? Wallace says that Miranda has a white savior complex. That sounds about right. Stay tuned.