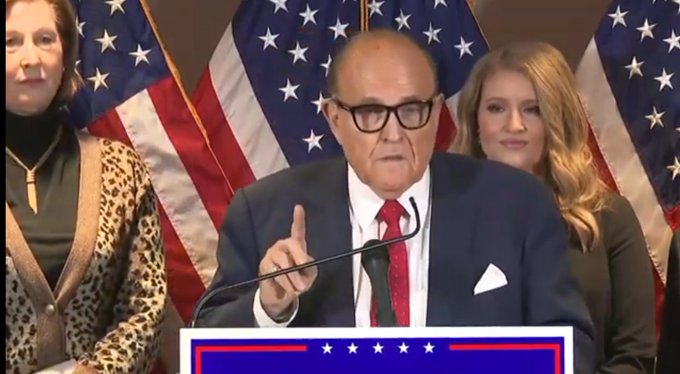 The Marxists on the January 6 Committee on Tuesday issued subpoenas for Trump’s outside legal counsel and accused them of pushing election lies.

The House Select Committee subpoenaed Rudy Giuliani, Jenna Ellis, Sidney Powell and Boris Epshteyn and claimed they “publicly promoted unsupported claims about the 2020 election and participated in attempts to disrupt or delay the certification of election results.”

The House committee investigating the Jan. 6 attack on the U.S. Capitol issued subpoenas Tuesday to Rudy Giuliani and three other allies of former President Donald Trump involved in efforts to overturn the 2020 election results.

“The four individuals we’ve subpoenaed today advanced unsupported theories about election fraud, pushed efforts to overturn the election results, or were in direct contact with the former President about attempts to stop the counting of electoral votes,” Committee Chair Bennie Thompson, D-Miss., said in a statement.

The committee said in a news release that Giuliani “actively promoted claims of election fraud on behalf of the former President and sought to convince state legislators to take steps to overturn the election results. He was reported to have been in contact with then-President Trump and various Members of Congress regarding strategies for delaying or overturning the results of the 2020 election.”

Powell, Thompson said in a letter, also promoted election fraud claims and was reported to have “urged President Trump to direct the seizure of voting machines around the country to find evidence that foreign adversaries had hacked those machines and altered the results of the election.”

Ellis, the committee said, “reportedly prepared and circulated two memos purporting to analyze the constitutional authority for the Vice President to reject or delay counting electoral votes,” while Epshteyn reportedly “had a call with former President Trump on the morning of January 6th to discuss options to delay the certification of election results in the event of Vice President Pence’s unwillingness to deny or delay the certification.”