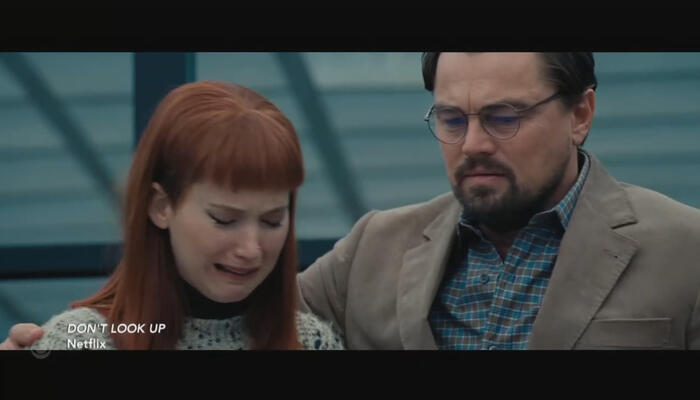 Some movies enter Oscar season with a certain swagger, a sense that Academy Award nominations are a fait accompli.

Don’t Look Up, for example, checked every possible Oscar box:

You can’t blame the talent behind the film, opening Dec. 10 in select theaters before bowing Dec. 24 on Netflix, for brainstorming their acceptance speeches now.

The so-called “first reactions” to the film seemingly confirmed all that Oscar buzz. The other films vying for awards might as well stay home:

And then the official “Don’t Look Up” reviews rolled in.

The far-left review from TheWrap.com is scathing, all the while admitting the film matches the critic’s worldview to a “T”:

You ever meet someone who shares all your opinions, but does so in such a tiresome and grating way that you begin rethinking your own point of view? That’s “Don’t Look Up” in a nutshell…

The Midwest Film Journal calls out both Don’t Look Up and Vice, McKay’s last Oscar-bait film given far too much credit by Academy voters, according this critic:

Watching a current McKay film is no more entertaining or informative than reading a Twitter thread by some con artist like Seth Abramson, who makes a living off weaving hyperbolic narratives that largely serve to sell books and endorsements. The film is rambling and diversionary, not as smart as it thinks it is or even a fraction as smart as it needs to be simply as a blatant, bare-minimum political allegory.

McKay once dabbled primarily in mainstream comedies like Anchorman, Step Brothers and The Other Guys. Now, he fuses his progressive politics with his art, and the results are dividing critics who otherwise agree with his views on most issues.

The far-left AV Club offers some faint praise between the uppercuts:

McKay’s film is fascinating to watch and also, in part, utter hell.

The Globe and Mail inveighs a critical trope typically used against unwoke comedy:

The film’s conceit could be sharply effective, in careful hands. But McKay knows only of punching down with meaty fists, so the result is a messy, smarmy assault.

The left-leaning Slash Film dubs the movie a “disaster” in more ways than one:

He’s created a smug, shrill, obvious satire that has nothing to say other than “Humanity is screwed.” It’s not even that I disagree with that assessment — things sure seem dire right now! But good satire requires more than simply pointing a finger at something and asking, “Isn’t that f***ed up?”

The far-Left Indiewire piles on, too, but saves the most damning critiques for McKay himself:

Is “Don’t Look Up” further proof that self-importance has dulled one of Hollywood’s funniest minds? I’m afraid so. Prestige is one hell of a drug, and McKay’s descent from the galaxy brain genius of “Step Brothers” to the winky-winky self-importance of his recent work has been like watching the world’s greatest jazz musician discover auto-tune and fall in love with the sound of their own voice.

The reliably Leftist Hollywood Reporter similarly pounds the film for its excesses:

[It’s] a cynical, insufferably smug satire stuffed to the gills with stars that purports to comment on political and media inattention to the climate crisis but really just trivializes it. Dr. Strangelove it ain’t.

THR also mocks the movie for attacking President Donald Trump in a way anyone with a few working brain cells could spot miles away:

And yet Don’t Look Up is clinging to a “fresh” rating at Rotten Tomatoes (for now), with some scribes praising McKay’s handling of the material. Modern film critics are consistently liberal, and they often cut films that concur with their world views some slack.

What’s more interesting is if the reviews will turn what looked like a sure Oscar lock into a movie lucky to nab a nomination or two – if that.

UPDATE: Here’s proof that liberal film critics go easy on progressive movies. Esquire, which leans religiously to the Left, framed its review of “Don’t Look Up” this way:

Is ‘Don’t Look Up’ a Movie That’s Impossible to Review? In Adam McKay’s new satire the world is doomed and the jokes are flat, but maybe that’s the point…