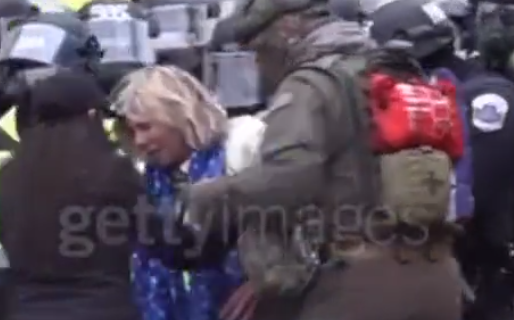 On Thursday afternoon, September 30th, at 3:45 PM Eastern the FBI raided Jeremy Brown’s home and arrested Jeremy. They charged Jeremy, a Green Beret, with trespassing on the US Capitol Grounds.  Jeremy broke the invisible boundary around the US Capitol on January 6th along with tens of thousands of fellow Trump supporters.  The boundary was not marked and the protesters were not warned that they were inside the invisible no-go zone.

The Gateway Pundit was notified by his family and an attorney of his arrest in September.  Jeremy is still sitting behind bars for standing outside the US Capitol on January 6th.  Democrats and Liz Cheney call this “justice.”

The FBI searched his house, RV, and trailer in September. Then they arrested Jeremy and took him away.
Jeremy’s family contacted The Gateway Pundit the following morning.

The Gateway Pundit spoke with Jeremy’s girlfriend after his arrest. She told us Jeremy would later appear in Pinellas County Court. Jeremy was charged with trespassing, a misdemeanor. The judge has refused to release Jeremy Brown from jail for standing outside the US Capitol on Jan. 6.

Jeremy Brown’s actual crime was refusing to be an FBI informant on January 6th.  So the Feds arrested him months later.

As we reported months ago, Jeremy Brown refused to be an informant for the dirty FBI — They wanted him to be one of their operatives at the Jan. 6 Trump rallies. He refused.

In October the judge overseeing Jeremy’s case refused to grant him bail. The judge refused him bail for a joke he posted on the front of his house.

Jeremy Brown did nothing wrong.

His only “crime” was refusing to work as an informant for the FBI!

But there is video of Jeremy Brown from January 6th.

Jeremy rescued a woman who was being trampled and beaten by US Capitol Police.

The police were killing her — like they killed two other women that day.

Jeremy Brown is currently sitting in jail for attending the Jan. 6 protests in Washington DC.

In this video, Jeemy Brown is seen rescuing a woman who was nearly beaten to death by US Capitol Police and was down on the cement.

Watch til the end!

Jeremy Brown is a hero.
Jeremy Brown has always been a hero.
Now he is rotting in jail due to the lies of the Biden DOJ.