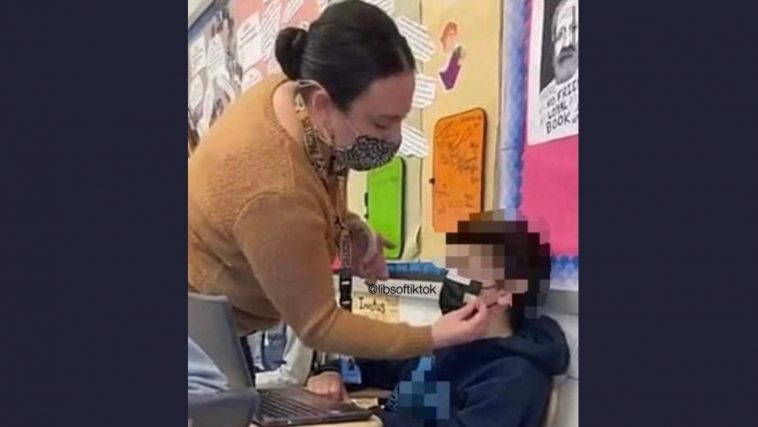 An unidentified teacher in Pennsylvania has been caught on camera taping a mask to a students face while he was sitting at his desk in class.

This is child abuse.

The unhinged teacher, who allegedly works at Pennfield Middle School, can be seen applying a piece of scotch tape to the side of the young boy’s mask as she attaches the other end to his face.

He looks to be right around just 10 years old.

On Monday, a picture of the appalling incident surfaced online, which naturally sparked outrage among parents in the community who are now planning a demonstration at an upcoming North Penn School District Board meeting this week.

Thursday’s school board meeting is going to be very interesting pic.twitter.com/vTCxNvx2ld

One concerned parent posted details of the demonstration to their Facebook page, calling on others to email the school board about the incident before the meeting.

“Pro-mask or anti-mask, I hope we can all agree that taping masks to children’s faces crosses the LINE. This was not a joke for the child or parents,” they wrote.

One thing is for sure, this disgusting, outrageous abuse of children should not be tolerated in the US – or any civilized society for that matter. This lunatic that’s masquerading as an educator should never be let around children again. As the concerned parent aptly put it – this is not a joke.

The North Penn School Board can be reached directly here.