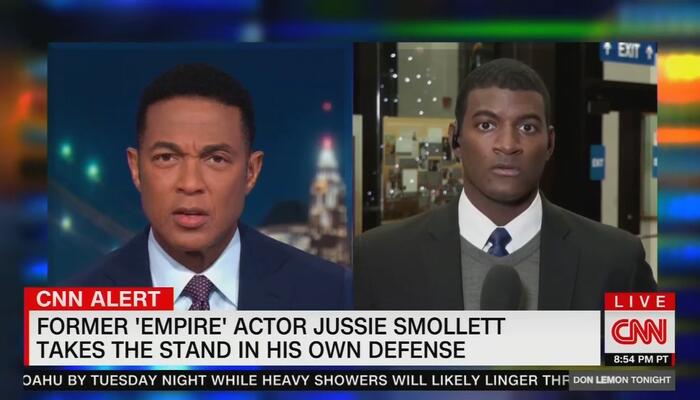 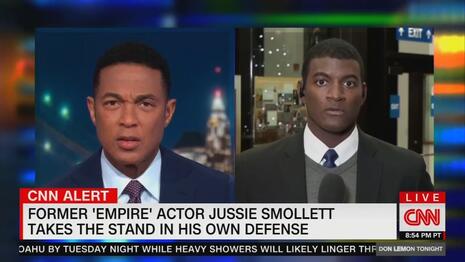 Days after CNN suspended and ultimately fired host Chris Cuomo for journalistic misconduct, former Empire actor and accused hate crime hoaxer Jussie Smollett took the stand in his own defense on Monday, where he’s accused of lying to police, and testified that CNN race-baiter and late-night host Don Lemon tipped him off to skepticism from Chicago police.

And later that night, when covering the trial, Lemon and correspondent Omar Jimenez omitted Smollett ratting out Lemon on the stand.

According to multiple reports from witnesses inside the Chicago courtroom, Smollett fingered Lemon as a source of inside information. “Smollett testified during investigation he got a text from Don Lemon — saying CPD didn’t believe him,” reported Fox News correspondent Matt Finn on Twitter. Adding: “(smollett [sic] talking fast here before an objection. Not verbatim.)”

“Don Lemon allegedly texted the former TV star shortly after he claims he was attacked in Chicago in February 2019, to say that Chicago’s Police Department wasn’t taking his allegations seriously,” reported Greg Woodfield, Andrea Blanco, and Stephen Lepore of the U.K.-based Daily Mail.

(smollett talking fast here before an objection. Not verbatim.)

And that wasn’t all. Unfortunately, it ended up getting stricken from the record:

Testifying in court on Monday, Smollet [sic], 39, claimed he had been in contact with CNN’s Don Lemon during the early stages of the CPD investigation.

In a remark that was presented and then struck from the record, he said things began to seem off when he received a text message from Lemon claiming the Chicago police had reached out to him to say they didn’t believe Smollett.

Later that night, Lemon waited until the last 10 minutes of the second hour of Don Lemon Tonight (10 minutes to midnight) to bring up the Smollett trial with Jimenez. The entire segment lasted five minutes and seven seconds and ended with Lemon signing off for the night and no mention of Smollett’s testimony about him.

And nowhere in Jimenez’s write-up of Monday’s trial events did he (or co-writer Eric Levenson) report to CNN’s readers that Lemon was a subject in his testimony. And in his own tweet about the trial, Jimenez claimed the “bottom line” was that Smollett was adamant that he didn’t plan a hoax “never in my life.”

The defense has taken Smollett through nearly every single one of the prosecution’s major points in this case. He’s refuted them at almost every turn and maintained his innocence throughout. Now, it’s the prosecution’s time for cross examination.

But that’s not surprising since Jimenez was the one who made the “fiery but mostly peaceful protests” line infamous during the 2020 Black Lives Matter riots.

Lemon’s career might now be tracking with that of his close friend Cuomo. Both are now accused of journalistic misconduct involving abusing sources to feed information to suspected criminals, and both are facing sexual misconduct allegations.

But will they have the same results? This is CNN.

CNN’s refusal to inform viewers about how Don Lemon was involved with Jussie Smollett was made possible because of lucrative sponsorships from Volvo and Amazon. Their contact information is linked so you can tell them about the biased news they fund.