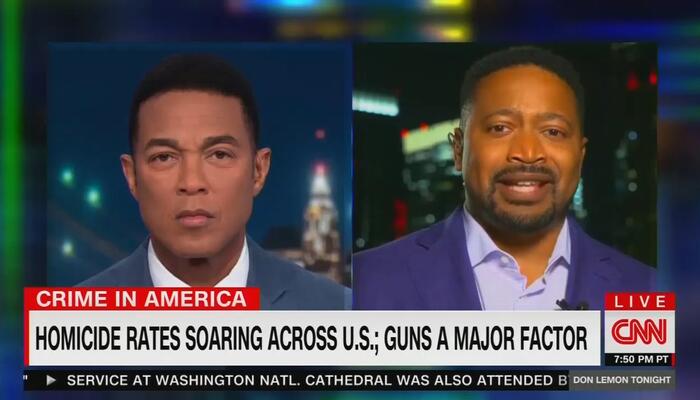 On both Thursday and Friday night, CNN host Don Lemon was oblivious to the role that the media-supported anti-police movement has played in increasing both the number of homicides and the number of traffic deaths as he aired segments blaming other factors — like guns and the pandemic — for the tragic turn toward more deaths.

On Thursday’s Don Lemon Tonight, the show ran a segment on the increase in people dying from car crashes in the past couple of years, which Lemon tried to link to an increase in “uncivil” behavior by the kind of right-wingers who have protested at school board meetings or refused to wear masks in public places. The CNN host set up the segment:

Lemon used several clips of incidents that have previously been hyped by the media in which people who were right-leaning got into arguments over not wanting to wear masks, or confronted liberal school boards. His guest, Pam Shadel of the Governors Highway Safety Association, argued that people were driving more recklessly because of pandemic-related stress or because there has been more empty space on the roads, as she also tied in increases in “uncivil” behavior.

As the liberal media increasingly mounted a sustained campaign that undermined police activity, nationally hyping what should have been local crime stories, police officers were bullied into being more restrained in doing their jobs, leading to law breakers getting away with more in both violent crime and reckless driving.

On the very next day, Lemon similarly did not implicate the left’s public undermining of police actions as he ran a report blaming guns and the pandemic for an increase in homicides over the past couple of years. On Friday’s show, Lemon fretted over some cities having record numbers of homicides this year:

Even though gun laws have not changed much in the past couple of years, correspondent Ryan Young spent much of his pre-recorded report blaming guns for the crime increases, as well as “stress” from the pandemic.

Notably, on CNN’s New Day Friday morning, one police captain tied in liberal policies like bail reform as he traced the surge in crime back 18 months (without mentioning that this was when all the media attention around the police-involved death of George Floyd began).

These examples of shoddy reporting that place the blame for a surge in preventable deaths in the wrong place, lining up with the biases of liberals, was sponsored in part by Consumer Cellular. Their contact information is linked.

DON LEMON: 38,680 deaths on U.S. roads last year — the most fatalities since 2007. And that’s even with pandemic precautions drastically reducing the numbers of drivers on the road. So what gives? Well, some experts are saying that this is due to an overall lack of civility in our society — a lack of civility we have seen at school board meetings. (clip of people fighting outside at a school board meeting, dated August 30)

Over mask mandates. (clip of people outside arguing about masks, dated August 11)

And on airplanes. (clip of people fighting on an airplane, dated September 10)

But, with more than 229 million licensed drivers, the risks to you and your family are higher than ever. So joining me now is Pam Shadel Fisher from the Governors Highway Safety Association. So glad to have you on. This is crazy. As I said, that’s more than 38,000 deaths on U.S. roads since last year. That’s a 7.2 percent increase over 2019. And there were fewer drivers on the road. What is this increase about? Is it stress? Is it anxiety? Can you make sense of these numbers?

PAM SHADEL FISHER, GOVERNORS HIGHWAY SAFETY ASSOCIATION:  It’s a combination of so many things, but it really does come down to a lack of regard for themselves and everybody else out there on the road. I mean, people are taking incredible risks, driving at high rates of speed, driving impaired on alcohol, drugs, sometimes multiple substances at the same time; not wearing seatbelts — which people say to me, “Everybody wears a seatbelt.” ‘They aren’t wearing seatbelts. They’re using their cell phones.

They’re engaging in behaviors that not only put themselves at risk, but everybody else out there. So there is a disregard, and it’s like this lack of civility has really carried over onto the roadways system. And we’re paying for it. We’re paying for it with lives. Families are losing loved ones at numbers that we have not seen in decades. And it is so frustrating to all of us in traffic safety.

And I think there’s just been so much stress — so much, you know, just feeling like you’re losing control — and so people are getting out there on the road, and they saw open highways, and they would say, “Wow, I can go with the pedal to the metal, and push it and do things,” and, you know, just to kind of relieve some of that stress. A lot of people have been medicating, using alcohol and using drugs because they’re so stressed out.

When you get that combination of alcohol and drugs and get behind the wheel, and you are literally out of it ready to explode, you could really cause damage and kill someone. And that’s what’s happening out there. So we have to think about the decisions we make — those things that we make — that we do behind the wheel have a ripple effect, and it’s not just you that’s impacted by it, but many other people.

LEMON: Let’s talk a little bit more about what you said — what I said as well because, again, it’s not just reckless driving. There are fist fights on airplanes — people attacking each other over masks — you see people fighting in, you know, streets, i mean, in the supermarket. It’s like something is broken with how we treat each other, Pam.

DON LEMON: Just three more weeks before 2021 comes to a close, but it’s already going down as a year with a soaring number of homicides all across the country. The murder rate in some cities breaking records. Experts say stress from the COVID pandemic definitely playing a role here. But the major factor, guns. More tonight from CNN’s Ryan Young.

RYAN YOUNG: Across the country, police departments, cities, towns, and communities dealing with an alarming increase in the number of homicides. From Portland. … to Birmingham. …  now to Austin.

JOSEPH CHACON, AUSTIN INTERIM POLICE CHIEF: This certainly is not something where we’re setting the type of record that we want to be in the news for.

YOUNG: Where the fast-growing city has shattered its yearly record for homicides, making 2021 the city’s deadliest year on record. A CNN analysis of more than 40 of the most populous cities in the U.S. shows nine have already set homicide records before year’s end. Indianapolis has surpassed their 2020 total of 215. Philadelphia at 524 homicides today. Albuquerque, New Mexico with 103. And Austin, Texas. What’s it like to see these numbers you guys are experiencing right now?

YOUNG: Austin police chief Joseph Chacon says there’s no one reason for the record high numbers, but he has noticed a disturbing trend.

CHACON: We have seen really a spike in gun violence, so, you know, just a proliferation of illegally owned weapons on the street.

YOUNG: Nationwide, more homicides are being committed using guns than ever. Shootings have increased nearly in all major U.S. cities that track that data. There have been 80 (sic) (actually 88) homicides in Austin so far this year according to the police department — double last year’s total — and the city homicide rate has ticked up to 8.5 percent, putting it on par with numbers not seen consistently since the ’80s. But it’s not guns alone — police chiefs, activists and experts say COVID-19 is a contributing factor.

THOMAS ABT: You have something of a perfect storm where the people who are at the highest risk for violence are being pressed more than ever.

ABT: Police need to be at the table, and police are part of the solution. But they are not the whole solution. You need community-based organizations and law enforcement agencies working together.

CHRIS HARRIS, AUSTIN JUSTICE COALITION: Maybe if we were sending other types of resources other than just policing to our communities, we would be having different outcomes.

YOUNG: Chris Harris says he’s seen more guns on the street, leading to not only just violence but deadly consequences.