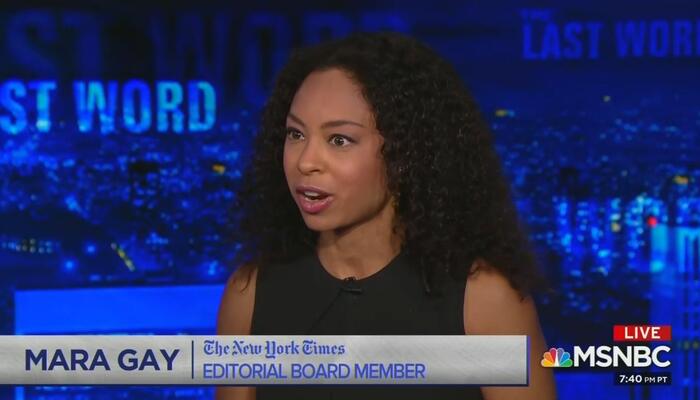 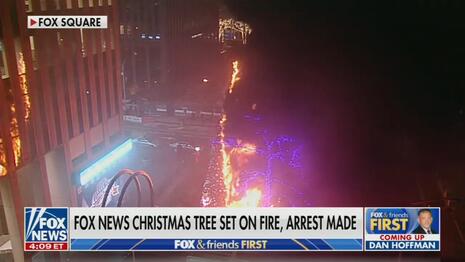 In her latest column for The New York Times (posted Thursday night), editorial board member Mara Gay used the arson of the Fox News Christmas tree (allegedly committed Wednesday by a homeless man) to mock people leaving New York City due to, among other reasons, the coronavirus pandemic, the far-left local and state governments, rising crime, and subpar schools.

Of course, what Gay failed to mention amid her potshots was that she’s a paid MSNBC contributor, so she naturally has an ax to grind.

Gay — who’s shown a lack of basic math comprehension and a fear of American flag — began with the Christmas tree burning down and how police are “investigating” the role of “drugs or mental illness,” but then engaged in some snark because Fox employees would dare be upset about what happened:

Inside the studio, the demise of the Fox Christmas tree struck a nerve: It was more evidence that New York, and maybe America, might be too far gone to be saved. “It is about everything that we stand for as a country,” an anchor said on-air on Wednesday of the tree. “It’s kind of all we have left.”

Painting “a few conservatives” as the grinches trying to steal Christmas, she fretted that they’re “not feeling festive this year” “in this largely liberal town” because “[t]heir neighbors keep voting for Democrats, and some of them are even protesting the police at regular intervals.”

“The de Blasio mayoralty was one long nightmare of wokeness. Liberals have even taken over the Metropolitan Opera,” she ironically added considering the grimaces and meltdowns liberals had in red states like Florida or during the duration of the Trump presidency.

The difficult trials have driven a pair of famous conservatives to pen essays about why they are leaving New York.

Karol Markowicz, a writer for The New York Post and Fox News, wrote this week that she and her family were leaving partly because New Yorkers were continuing to wear masks outdoors and require children to wear them at school. “We’re going to Florida, a state we’ve come to regard as the beacon of freedom in this country,” she wrote.

Then there’s Sohrab Ahmari, a contributing editor to The American Conservative, whose description of his near-decade living in New York just made me sad.

“New York City, to my mind, isn’t a megalopolis made up of five enormous boroughs,” he wrote. “Rather, ‘The City’ is a small rectangle with our apartment at its center. In one direction, its outer boundary touches the News Corp. building, where I used to work until recently; in the other direction, it spans the far side of Queensboro Bridge, which I often run across for exercise, barely landing on Long Island City before I race back over the East River to the familiar comforts of Midtown.”

Gay then argued they and the other expats were whimps because they don’t want to live a life where they (and their children) don’t have to face the threat of crime and a low standard of living:

Listen, they say that if you can make it here, you can make it anywhere. But there are some people who just don’t have what it takes. New York City is dirty. It’s loud. Tiny apartments are wildly expensive. The city was hit hard by the pandemic. The national supply chain crisis has led to a cream cheese shortage at bagel shops.

Asking the people Gay and her pals at MSNBC so desperately hate, she asked that those “wobbling on New York will tough it out with the rest of us” for “the sake of diversity” and that “[t]he city’s recovery is an all-hands project” because, all in all, it “makes us smarter.”

To be fair, she wrapped with two attempts at being unifying (which she should try to do more of), saying that the arson “didn’t help” bring out the Christmas spirit and “no one should ever light a Christmas tree on fire, even if it is tacky.”