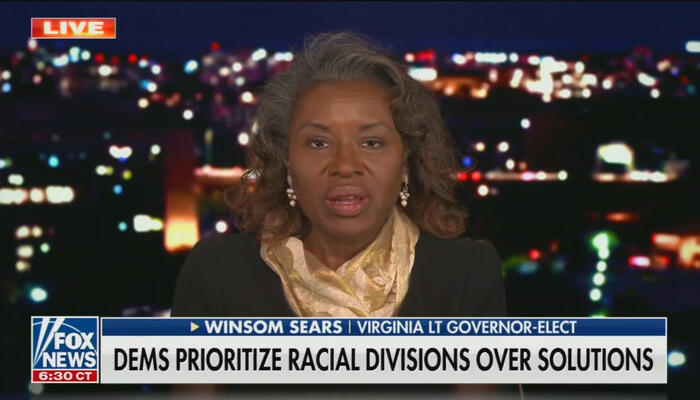 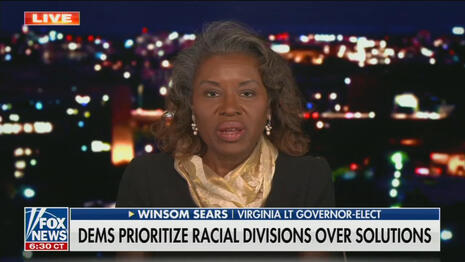 So there they were in the aftermath of the Virginia election. One MSNBC or CNN commentator after another calling the GOP wins in Virginia a “racist dog whistle.”

Easy. Either A) – ignore their elections because it completely blows up their treasured “racist dog whistle” narrative. Or, B), say this of Sears, as lefty Michael Eric Dyson did say. Sears, he told MSNBC’s Joy Reid, is the “Black mouth” for “White supremacist practices.”

Then there was MSNBC’s Tiffany Cross, saying:

This is about the fact that a good chunk of voters out there are okay with White supremacy. Let’s call a thing a thing. Actually, scratch that. They are more than okay.

Which, of course, is why they voted for the black Ms. Sears and the Hispanic Mr. Miyares, right?

What’s really going on here is that all these lefty commentators have appointed themselves the masters and mistresses of the liberal racist plantation. And woe betide if you, like the Lieutenant Governor-elect, are black and have the nerve to step off it.

There is, in fact, nothing new here. This leftist media thorough-going racist treatment of blacks who do not toe the left-wing party line first surfaced during the confirmation hearings for then-Judge Clarence Thomas to the Supreme Court. The nomination came about with the retirement of the Court’s first black Justice, Thurgood Marshall. The leftists of the day instantly made clear that this was the “black seat” on the Court, and there must be a black nominee. President George H.W. Bush complied and nominated the African-American Judge Thomas.

But alas, Judge Thomas was – oh the horror! – a conservative. In a blink the campaign on the left was on to destroy the Judge. It reached a head when an incensed Judge Thomas sat down at the witness table and, with the liberal media’s television cameras zeroed in on him (Fox did not yet exist) said this:

And from my standpoint as a black American, as far as I’m concerned, it is a high-tech lynching for uppity blacks who in any way deign to think for themselves, to do for themselves, to have different ideas, and it is a message that unless you kowtow to an old order, this is what will happen to you. You will be lynched, destroyed, caricatured by a committee of the U.S. — U.S. Senate, rather than hung from a tree.

Similarly, Dr. Ben Carson made his own observation of white liberals when faced with a black conservative:

Well, they’re the most racist people there are. You know, they put you in a little category, a little box — you have to think this way. How could you dare come off the plantation?

Like Justice Thomas and Dr. Carson, Lieutenant Governor-elect Sears has said her version of this:

The Democrats have been successful in instilling fear in people who look like me. I have had white liberals talk down to me — talk down to me, and as if I didn’t exist — simply because I’m a Republican. I mean, how dare you? Who told you you could talk to me that way? Because I’m not the right kind of black? Is that how this works?

ReidOut host Joy Reid was, not surprisingly, the worst. Five minutes after polls closed, Reid peddled the lie that Youngkin ran a racist campaign to ban Toni Morrison from schools and held out hope for Democrat Terry McAuliffe on the basis of Black voters who were scared that Youngkin “would purge” books about W.E.B. DuBois and Martin Luther King Jr. from schools.

I wish Joy Reid would invite me on her show. Let’s see if she’s woman enough to do that. I’d go in a heartbeat and we’d have a real discussion without Joy speaking about me behind my back, if you will.

[Reid] talks about white supremacy. Does she know that I ran against a white supremacist? I mean Joy come on. Get your facts straight and then come talk to me. I’m waiting for you.

In fact, to borrow from Justice Thomas, all these liberal commentators view Lieutenant Governor-elect Sears as an “uppity black” – and they will target her. Only a short time ago they played this game with Larry Elder, the black Republican who challenged the white Democrat liberal Gavin Newsom in the California governor’s recall race. Recall, as I wrote here in August, that a columnist for The Los Angeles Times actually said that “Larry Elder is the Black face of white supremacy.”

There is, in fact, a reason for all of this hostile racism against black conservatives. History inconveniently reminds that the American Left’s Democratic Party was literally founded by slave owners, then run by segregationists and now by believers in the son of segregation known as identity politics. They have a political culture that is centered on race, and they judge Americans by race, not as individuals – which is exactly why all those Virginia parents were so vociferously opposed to Critical Race Theory.

And if you have the nerve, as the new black Lieutenant Governor of Virginia Winsome Sears manifestly has, to challenge the American Left on race – the MSNBC’s and the rest of the liberal media of the world will come for you.