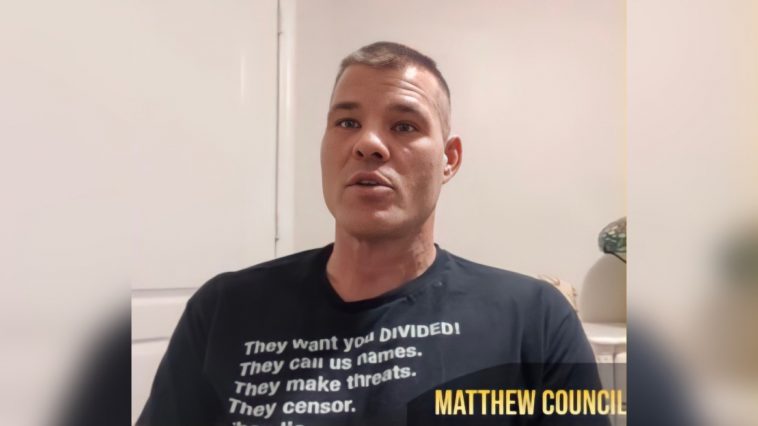 J6 defendant Matt Council was arrested in the Middle District of Florida on January 14, 2021. He was accused of assaulting, resisting, or impeding certain officers and entering and remaining in a restricted building or grounds, and five other charges.

Council was arraigned last April 8 where he pleaded not guilty to all counts and was released on personal recognizance bond.

According to Council, he was abused after January 6th in Hillsborough County jail where he was allegedly abused by a serial rapist. He was also forced to be confined in a mental institution where they allegedly spit in his food tray.

Here is his story:

I keep hearing so much disinformation about the facts surrounding January 6th.  I feel like the Alternative Media has abandoned all the January 6th POWs by focusing all of their attention on COVID and or exposing FBI/DOJ’s involvement about that day and not airing stories from J6ers themselves. J6ers need your help to gain exposure for their fundraisers because even though Alternative Media has exposed the lies, the DOJ is still moving forward with throwing us in PRISON. Our public defenders are limited to put it nicely and 50k is what it takes to retain a solid attorney that will fight for our rights.

My story on January 6th (full interview attached) is very eventful and I know (saw with my own eyes BLM & Antifa) who was violent and who wasn’t, but it’s the aftermath that is striking (as for all other J6ers).  It’s not only the government torturing and abusing J6ers, it’s other Americans and Federally Funded organizations.

To get right into my story, I have been abused after January 6th more times than I care to remember.  I have been abused in Hillsborough County Jail by a serial rapist who raped my bunky in the mouth and another inmate I was friends with. Him and other Officers tried to come into my cell repeatedly and I had to stay up for 3 nights straight to stay safe. They were playing a Trump/Flynn parody like a tribunal was going on and a “Hero Hero Hero” song over and over again because of my involvement on January 6th.

Then they released me and made me go to a Mental Institution because they made up that I was hearing things to put me in isolation in the first place. I was having delusions due to football head impacts but mostly loss of sleep/ no food and stress.

The Mental Facility GracePoint spit in my food tray and were also playing the same Trump Parody and sounds of gunshots to continue the torture from the Jail (they worked together). They wouldn’t give me my medicine and kept the fire alarm blinking light on knowing it would cause a seizure and it did. They had EMS come and pick me up and take me to St Joe’s and by then I thought I was the Admiral of the Space Force, my urine was dark brown and the St Joe’s barely did anything to treat me. Even after I told them I was being tortured, they Baker Acted me back to GracePoint.

That’s just a taste of the Abuse. I’ve also been punched in the face at another facility by a technician who still works there (Tampa Community Hospital), forced to take medication I don’t want and my family believed them over me so they could make me stay for extra days.

They stuck me with needles in the same spot, called me Obama sarcastically, and did their usual coming into my room every 15 min and wake me up on purpose. Then they raised my sleep medication levels now I sleep all the time.

I’ve also been forced to sleep in a bed riddled with flees and Bed Bugs and my Public Defender said, “It’s a court order” and was like it’s just tuff sh*t.

I DON’T KNOW WHICH END IS UP AND CAN’T TRUST ANYONE NOT EVEN MY OWN FAMILY.

All of this sucks because they are making it look like my Mental Condition caused by College Football made me delusional and none of it ever happened. I know the difference.

THEY HAVE PUSHED MEDICINE ON ME AND ABUSED ME IN THE FACILITIES AND JAIL BECAUSE OF WHAT I BELIEVE AND WHAT I SAW AND DID ON JANUARY 6TH & I AM FACING 2 MORE YEARS.

Please help me. Interview below.

My first public interview. I share my experiences that reveal the J6 setup as well as the abuses I have suffered as a result including torture. Please check out my real story of J6.

AmericanGulag.org is a project of Jim Hoft for the benefit of the public and to provide sunshine and publicity to the scores of political prisoners wrongfully imprisoned as a result of the protest on January 6th.