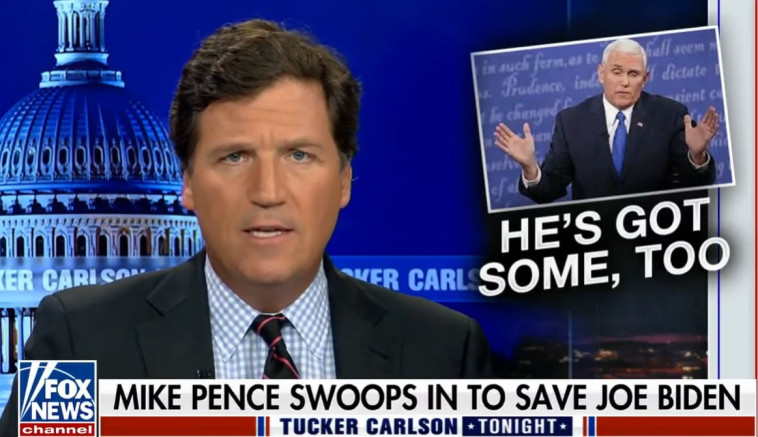 Tucker had another excellent opening monologue on Tuesday night.

He noted that Mike Pence had swooped in to save Joe Biden.  Crystal clean Pence was found with classified documents yesterday.

In fact, it’s entirely possible, in fact it’s likely that Mike Pence was asked to do this by federal prosecutors who are trying to build a case against his old boss, Donald Trump.

TRENDING: HERE IT IS – THE SMOKING GUN: The 20 Point Email of Classified Information from His Father that Hunter Biden Sent to Burisma Board Member in April 2014

Now the point would be to show that not every state official walks off with state secrets.  Donald Trump was uniquely evil in that regard like so many others.  See Mike Pence didn’t do it.

So if that was the plan, and we suspect that it was, it backfired most spectacularly because Pence’s lawyer discovered classified documents. He immediately loaded these documents into his car and drove them back to Washington to give them to authorities.

Tucker points out that Pence isn’t worried about having the documents, which is a crime.  “Mike Pence is not worried about FBI raids…maybe someday we’ll know why.”

If Mike Pence committed the same crime as Joe Biden, then Biden must be innocent, the media declared.

The press corp like the federal government loves secrecy because secrecy is the key to their power.

Next, Tucker reported on the story of Hunter sending an email to his business partner, Devin Archer, that The Gateway Pundit reported on Monday night.

Tucker then points out that the email noted above was written when Hunter was a drug addict.  Somehow in that state, Hunter Biden drafted this email to his friend.

Tucker shares that the sanctions coming from Hunter was the same topic that the Deep State FBI used on General Mike Flynn.  How could Hunter even write such a document?

This really is a scandal.  It’s about Ukraine and it’s about the Biden family’s stream of influence.