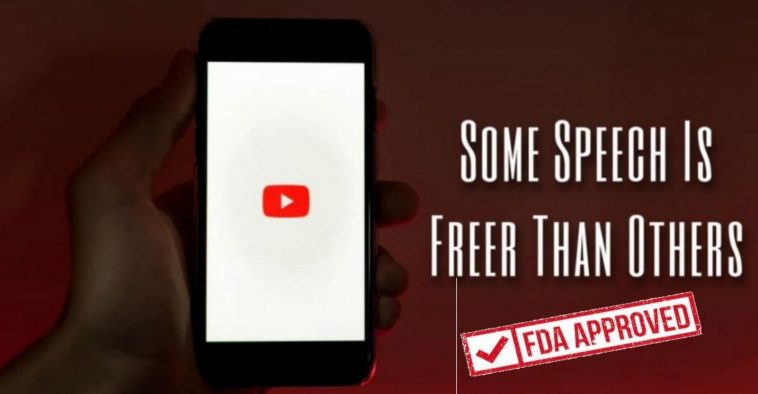 The US Food and Drug Administration’s shameless attempt to censor medical information about potential alternative treatments to Covid-19 has been exposed.

An email that was accidentally sent to independent journalist Alex Berenson as part of an unrelated Freedom of Information Act (FOIA) request has revealed that the FDA pressured a lobbyist at Google to delete a YouTube video that explained the potential of a new monoclonal antibody treatment for Covid-19.

The email, dated April 30, 2021, was sent to Jan Fowler Antonaros – a lobbyist for Google, YouTube’s parent company – by FDA director of social media Brad Kimberly, who wrote that the three-minute video about a new drug called ‘leronlimab‘ was “very problematic” when it comes to furthering Covid misinformation.

The very same day the video was posted to the platform, Kimberly requested that YouTube immediately pull the video down.

“I just wanted to flag a video that we believe is misleading when it comes to COVID-19.

Overall, the video is very problematic when it comes to COVID misinformation. This video should be pulled.”

“Good afternoon…I just wanted to flag a video that we believe is misleading when it comes to COVID-19. I submitted a report through YouTube proper, but I’m flagging your attention as well.

This video is misleading. The drug identified has not been identified by the US FDA as safe and effective against COVID-19 and is not authorized or approved for such use. It also conflates the Filipino FDA and US FDA by misusing the USFDA logo and implying that it is planning to evaluate the drug for an EUA, which isn’t true. Overall, the video is very problematic when it comes to COVID misinformation. Combined with the unauthorized use of intellectual property, this video should be pulled. Surprisingly, YouTube left the video alone despite the request. The company said it had reviewed the video and found that it did not violate any guidelines, so it was not removed from the platform.

According to investigative journalist Alex Berenson, the decision to leave it up was likely because the video did not say or promise the new drug to be a cure for Covid, but instead only touted the potential benefits and even said that the FDA would need to review the results to become fully approved as part of a treatment plan for the virus.

How exactly is that problematic misinformation? Even YouTube decided to leave the video alone, and they censor just about everything.

As of right now, the video in question is not available to view. The creator of the video, Ryan Joseph, has reportedly switched the video into private mode, which only allows approved users to see the video. He says the change was recent because he does not want any negative press associated with the new drug in the aftermath of Berenson’s coverage of the FDA emails.

According to the Federalist, who spoke with Joseph about the video:

“The video is now listed as private. Its poster Ryan Joseph told The Federalist that was his decision, explaining that he did “not wish to attract negative attention towards leronlimab due to Alex Berenson’s article.”

A YouTube spokesperson confirmed to The Federalist that the decision was Joseph’s, although the video can be seen as an archived webpage.”

It should be pointed out though that in Alex Berenson’s original article, he notes that the video has disappeared and is only available to view in the internet archive here.

He even posts a screenshot of a broken youtube video with the error “This video is unavailable.” Something isn’t adding up.

What’s even more concerning is that Berenson says he filed a separate FOIA request for all records of “communications between any FDA officials to executives, managers, or other employees at Twitter, Facebook, Instagram, Google, and YouTube regarding COVID and Sars-Cov-2,” including specifically any “anti-misinformation” enforcement efforts,” but he was told by the agency that it had not found a single record of this sort – even though they mistakenly provided one with this mistakenly attached email.

Is the FDA ignoring FOIA laws and just choosing not to provide certain documents? If so, that would nuke any shred of federal transparency we have left. This should be immediately investigated by Congress either way.

Censoring speech that is politically inconvenient is what happens in Communist China or Pravda Russia, not America.

This overreach to interfere in public discourse by federal officials is a criminal violation of our first amendment rights.