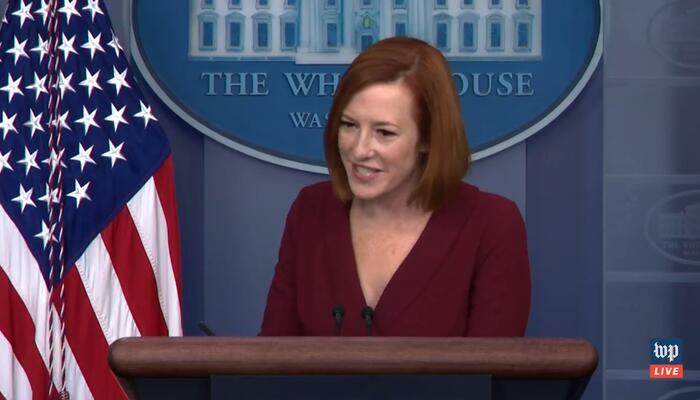 After not having been around for Friday’s return of The Psaki Show, Fox’s Peter Doocy made the most of his first crack at Press Secretary Jen Psaki on Monday’s installment with hardballs on President Biden’s past comments smearing Kyle Rittenhouse, new reports about tension between the White House and Vice President Harris, and whether the U.S. government will boycott the 2022 Winter Olympics in Beijing.

Doocy started his turn by getting right to the chase on China: “Ahead of this meeting with President Xi, is President Biden considering a diplomatic boycott of the Beijing Olympics this winter?”

Just as she did on Friday when asked by Reuters’s Andrea Shalal, Psaki ducked and refused to stand up for human rights, saying she doesn’t “have anything beyond that for you.”

Doocy quickly moved to the increasing reports on Harris’s staff pitching fits: “There are a few reports from over the weekend that the Vice President is unhappy. Can she expect the President’s automatic endorsement if she decides to run herself in either 2024 or 2028?”

As an addendum to her awkward, Sunday night tweet praising Harris, Psaki said Biden felt Harris “was exactly the person he wanted to have by his side to govern the country” and she’s been “a key partner,” “a bold leader,” and someone “who has taken on incredibly important assignments.”

Psaki also addressed the stories head-on and, while Doocy followed up, she didn’t budge (click “expand”):

PSAKI: Well, first of all, the President selected the Vice President because — to serve as his running mate because he felt she was exactly the person he wanted to have by his side to govern the country. She is a key partner. She is a bold leader and she is somebody who has taken on incredibly important assignments, whether it is addressing the root causes of migration at the northern triangle, or taking on a core cause of democracy in voting rights, so that is who the President selected. I — I don’t have any predictions of whether she will run, when she will run, I will leave that to her, but I can tell you that there’s been a lot of reports out there and they don’t reflect his view or our experience with the Vice President.

DOOCY: And so, you guys have not heard that the Vice President or key members of her staff are unhappy?

PSAKI: Here’s what I know, Peter. I know that the President relies on the Vice President for her advice, for her counsel. She is somebody who is not only taking on issues that are challenging; she’s not looking for a cushy role here. No vice president is. No president is. And that she’s somebody that is a valuable member of the team and he expects to also — you can all expect to be out there, out in the country in the infrastructure bill and he’s looking forward to having her out there too.

Doocy wrapped by drilling down on President Biden’s attacks on Rittenhouse just after the August 25, 2020 shootings: “Why did President Biden suggest that Kyle Rittenhouse, on trial in Kenosha, is a white supremacist?”

Amazingly, Psaki initially said she wouldn’t “speak to…an ongoing trial,” but she then promptly did the opposite by implicitly denouncing Rittenhouse:

What I can reiterate for you is the President’s view that we shouldn’t have, broadly speaking, vigilantes patrolling our communities with assault rifles. We shouldn’t have opportunists corrupting peaceful protests by rioting and burning down the communities they claim to represent[.]

Doocy tried again, pointing out the fact that Biden did weigh in and “Kyle Rittenhouse’s mom came out saying that the President defamed her son and…she claims that when the President suggested her son is a white supremacist, he was doing that to win votes.”

Questioned whether that was the case, Psaki made it clear she was done: “I just having nothing more to speak to — an ongoing case where the closing arguments were just made.”

Moments later, NBC’s Peter Alexander brought up inflation: “Americans are seeing their dollars, their paychecks stretched right now. Why should Americans not be concerned that injecting another $1.57 trillion or more would raise inflation?”

Hilariously, Psaki insisted that there’s “no economist out there…projecting that this will have a negative impact on inflation.” Oof.

And during a follow-up, Psaki falsely claimed that “[n]o one is denying that inflation and…raising costs is an issue for the American people,” which would be news to people like NBC correspondent and MSNBC host Stephanie Ruhle.

In a peculiar exchange, the Daily Caller’s Shelby Talcott sought comment on the reportedly low vaccination rates in the U.S. intelligence community and whether it could negatively “impact…national security” if scores of employees are forced out due to mandates.

TALCOTT: There’s been reporting indicating that there’s a lower vaccination rate in some of the intelligence agencies. Congressman Chris Stewart has said that some are as high as 40 percent unvaccinated. There’s also been similar reporting on vaccine holdouts at key military bases. Real Clear Politics said there’s around 10 percent of highly-educated and trained personnel refusing the vaccine at one of their top weapons testing base. So, with the vaccine deadlines looming, is the administration concerned about the impact on national security if some of these percentages remain high? And secondly, is there any sort of contingency plan in place in the event that we see a number of personnel taken off because of this mandate?

PSAKI: Well, I would first point you to the Department of Defense. Their — their uptick numbers of people whoa re getting vaccinated are quite high, so that’s not consistent with what I have heard and they can give you more specific details. And I don’t know if this is applicable to the agencies that you have mentioned, but we know that, in some components of the federal government, we’re in a little bit of a delay in people entering the information and data for their vaccination status and that’s something that we’re encouraging people and workers to do update as needed as we lead up to the timeline. So, that does not sound consistent with the data that I understand to be accurate, but I would point you to any agency on the percentages within their agencies.

TALCOTT: So, there’s no — there’s no concern about a number of personnel in any of these agencies having to leave the workforce because they’re not vaccinated?

PSAKI: Well, those numbers are not consistent with what I understand to be accurate, so I would point you to the agencies on the numbers and specific percentages per agency.

To close out the briefing, American Urban Radio Networks correspondent Ebony McMorris took viewers into the theater of the absurd as she trotted out the tiresome liberal media narrative that the Rittenhouse trial was, along with the Ahmaud Arbery trial, proof of “unfairness” “in our criminal justice system” as “[r]ace has really still taken presence over in both cases and people are wondering what’s happening next.”

Exit question: Is there anything that the liberal media doesn’t view through the prism of racism?

[…] The press is the only thing holding the Biden-Harris administration remotely accountable, and they have done a poor job of it. The majority of the national scrutiny is coming from just one young reporter at Fox. […] 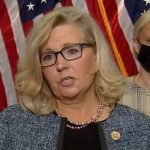 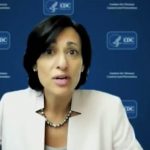