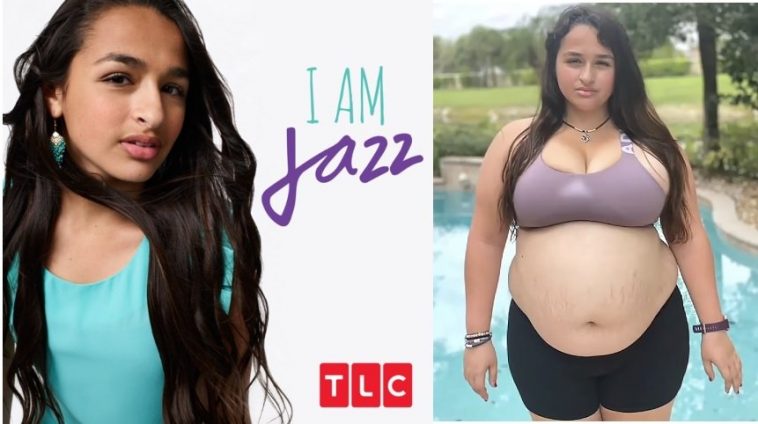 The parents of Jazz Jennings, a man ushered into the national spotlight as a transgender reality tv star at the age of 5, “fat-shame” and chastise their self-proclaimed mentally ill son in season 7 of “I am Jazz.

In a trailer for the upcoming season, Jennings reveals he has gained over 100 pounds while struggling with mental health issues while being mocked by his family, in the trailer of Season 7 of his TLC reality series “I am Jazz.”

“I do experience fat-shaming from my family,” the 21-year-old, who underwent gender reassignment surgery in 2018, explains in one scene. “It makes me feel really humiliated.”

In another clip, Jazz takes his shirt off and strips down to a sports bra to showcase his “big old belly.”

Plans to attend Harvard University fail by the wayside two years ago because had to “refocus and recenter” his mental health, he explains.

Jazz’s parents, Jeanette and Greg use the name “Jennings” as a pseudonym to guard their privacy. The couple, who began documenting their son’s transition to a girl at the age of 2,  reprimand Jazz for being obese and lethargic following the gender reassignment surgery, in another scene. “Even when we think we are doing something right, she falls off the wagon,” Jazz’s mother Jeanette laments while discussing his weight gain.

In an argument with his parents, Jazz pledges to lose weight.

“Prove it! Because you’re all talk!” his mother retorts.

“I’m out of shape. Be easy on me,” Jazz tells his parents and siblings who are seen scolding him at the dinner table. “Having all this extra weight, I can’t do so many things with my body that I used to be able to do.”

Jennings’s brother Sander, is also featured in the trailer, gloating over his “first formal date with a transwoman.”

“This is a great first date with an amazing and beautiful woman,” he says.

“Could I see myself having sex with someone who has not received her bottom surgery yet – I’m not sure,” he continues.

The mother Jeanette is then seen musing over whether Sander and the transwoman have “dabbled in the bedroom” while gossiping to her children’s grandmother.

In June, Jazz announced on Instagram that he is suffering from binge-eating disorder, warning he is “ready to turn over a new leaf,” but “running out of trees now.”

In season one of “I am Jazz,” Jeanette and Greg claim Jazz was born a boy but insisted from the time he learned to speak that was he is a girl and celebrated dressing their then-5-year-old son wearing a dress to school for the first time in pre-k.

As the left attempts to normalize ‘Drag Queen Story Time’ and incorporate transgender themes into programming for kids, the number of children undergoing transgender procedures has spiked by 4000 percent in the United States and the United Kingdom over the past decade, according to a recent study published by the American Academy of Pediatrics.

Gender dysphoria among children is also an unprecedented epidemic in Canada.

In an interview with CB, Canada’s state broadcaster, Dr. Stephen Feder, co-director of children’s “gender diversity clinic” noted that the hospital saw one or two children per year who “wanted to change their gender or had questions about their gender identity” ten years ago, but in 2018 that number went up to 180.