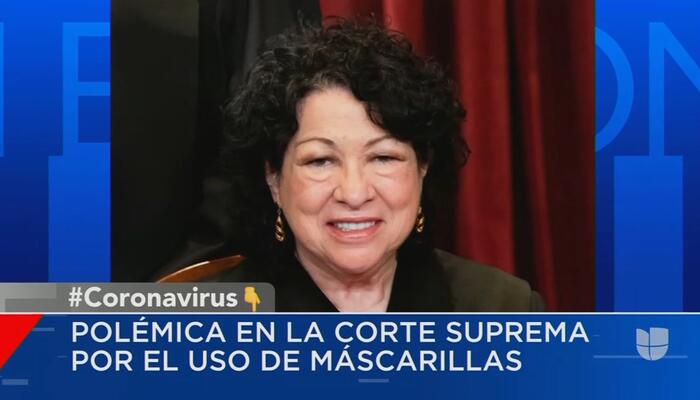 Univision pounced at a chance to vilify Supreme Court Justice Gorsuch over “Maskgate”, which was based on an NPR report. Unfortunately, Univision viewers were treated to two big lies long after the NPR report was debunked.

Watch the full report as aired on Univision’s Edición Digital:

CAROLINA SARASSA: Even the Supreme Court has controversy over the use of face masks. Justice Sonia Sotomayor says that she’s been working from home because she doesn’t feel comfortable (enough) to be close to her colleagues that do not wear (face masks), like Justice Neil Gorsuch. Sotomayor is diabetic and knows that getting infected with COVID would pose a very high risk. The justice says she has conveyed her concerns to Chief Justice John Roberts, and no decision has been made public.

The report aired at 12:03 Eastern, roughly a half hour after news broke of the joint statement issued by Justices Gorsuch and Sotomayor, in which they said: “Reporting that Justice Sotomayor asked Justice Gorsuch to wear a mask surprised us.  It is false.  While we may sometimes disagree about the law, we are warm colleagues and friends.” But Univision plowed ahead with the report. Carolina Sarassa ultimately read the report on-air, but there is an entire systemic failure at play here by a news division that represents itself to Hispanics as arbiters of truth and facts.

That was the first lie. The second was the allegation that Sotomayor worked from home. Per THE LEAD PARAGRAPH of the NPR report that served as the basis of Maskgate:

It was pretty jarring earlier this month when the justices of the U.S. Supreme Court took the bench for the first time since the omicron surge over the holidays. All were now wearing masks. All, that is, except Justice Neil Gorsuch. What’s more, Justice Sonia Sotomayor was not there at all, choosing instead to participate through a microphone setup in her chambers.

Not only did the report air live on the East Coast, but Univision failed to correct their reporting for the West Coast version that was also broadcast on the PrendeTV app. Several hours later, Chief Justice John Roberts would issue a statement of his own wherein he states: “I did not request Justice Gorsuch or any other Justice to wear a mask on the bench.”

Still, no correction from Univision and whether one gets issued at all remains to be seen.

Advertisers like Macy´s and Target enable the fake news and rampant bias that passes for news at the national newscasts in Spanish. Join us in calling them out here.