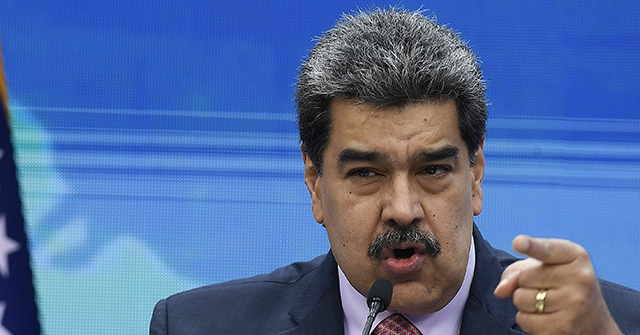 Venezuela’s socialist dictator Nicolás Maduro canceled his trip to Argentina on Monday after facing severe backlash from Argentine opposition politicians and members of the Venezuelan diaspora there, who fled the nation’s collapse under Maduro’s socialist regime.

Maduro was slated to participate alongside other regional heads of state and government in the 7th Summit of Heads of State and Government of the Community of Latin American and Caribbean States (CELAC), a 33-country regional bloc of which Argentina currently holds the pro tempore presidency.

The Maduro regime’s official statement regarding the cancellation of the socialist dictator’s trip was released through the website of its foreign affairs ministry and through the Twitter account of its top diplomat, Yvan Gil. In the statement, the socialist regime attributes the change of plans to having been informed of a “neo-fascist right plot” undertaken from the United States with the objective of carrying out “a series of aggressive actions” to “contribute to the discrediting campaign” against Venezuela.

In reality, the prospect of Maduro landing on Argentine soil instantly sparked a large amount of backlash and severe criticism among the South American nation’s right-wing opposition politicians, who vehemently rejected the dictator’s then-upcoming visit to their country.

Argentine lawmaker Patricia Bullrich, president of the opposition Republican Proposal party (PRO), formally filed a request before the United States Drug Enforcement Agency (DEA) on Sunday for the arrest of Nicolás Maduro. The DEA accuses Maduro of leading the Cartel of the Suns, a Venezuelan intercontinental cocaine-trafficking organization run through the Venezuelan military. The United States has an active $15 million bounty for information leading to the arrest and/or conviction of Nicolás Maduro.

“It is very important to fight against politicians involved in criminal organizations,” Bullrich said. “This collaboration is for the good of our democracies.”

The Argentine lawmaker celebrated the announcement of the cancellation of Maduro’s visit to Argentina on Monday, describing it as a victory for democracy.

“Democracy won! We stopped the drug trafficker Maduro and he will not come to Argentina,” Bullrich wrote on Twitter. “I celebrate how thousands of Venezuelans, who had to emigrate to our homeland expelled by socialist delirium, avoided the offense of seeing the government receive this dictator with honors.”

Libertarian lawmaker Javier Milei, a top candidate in the upcoming Argentine presidential election this year, was among those who rejected the prospective visit of the socialist dictator to Argentina, calling both Maduro’s visit and that of Cuban Communist Party figurehead Miguel Diáz-Canel an “international shame.” While Maduro ultimately decided not to travel to Argentina, Díaz-Canel did arrive in Buenos Aires to participate in the CELAC summit.

“Nicolás Maduro and Miguel Díaz-Canel are dictators, drug traffickers, and terrorists,” Milei wrote. “In their countries, there are no Human Rights, poverty reaches 90 percent, opponents are kidnapped, tortured, and killed. Receiving them in Argentina is an international shame.”

A group of Venezuelans living in Argentina after fleeing from socialism gathered on Sunday outside the premises of the Sheraton Hotel, where the CELAC summit is taking place, to protest against the presence of Maduro, Díaz-Canel, and the representatives of Nicaragua’s Sandinista Ortega regime.

Horacio Rodríguez Larreta, mayor of the city of Buenos Aires, celebrated Maduro not traveling to Argentina, describing it as an “example of what we can achieve when we stand firm against dictators that violate freedom, democratic values, and Human Rights in the region.”

Former Argentine president Mauricio Macri also reacted to Maduro not traveling to Argentina through a tweet in which he wrote, “Maduro was afraid. He realized that something is changing in Argentina.”