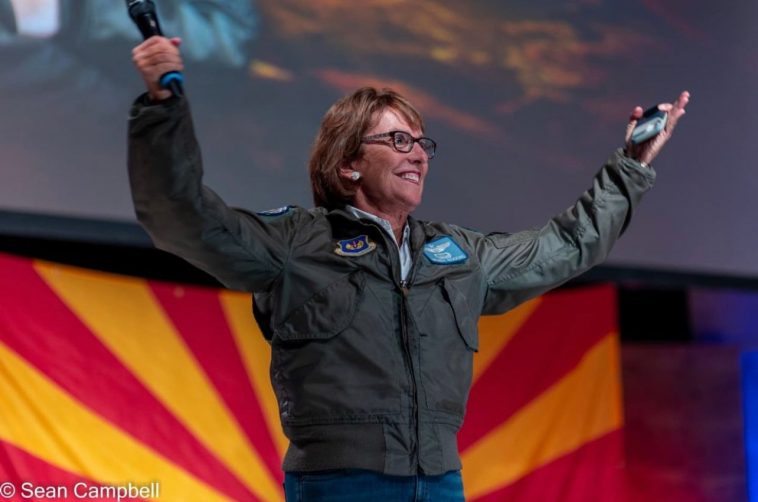 On Wednesday, Patriots rallied in Phoenix, Arizona for election integrity and Arizona’s audit.

It was exactly one year after our corrupt dictatorship scammed us out of our votes. Arizona State Senator Wendy Rogers gave a firey speech where she lambasted the RNC for their recent New Jersey election disaster, and called on Arizona Attorney General Mark Brnovich to proceed with indictments, perp walks and “arrests for those who shamed us”.

The Gateway Pundit correspondent Jordan Conradson spoke to Senator Rogers after the event.

Conradson: Itis November 3 2021. It’s been one year since this fraudulent election and Americans are tired of waiting. What is the next step with Arizona audit?

Rogers: Well, first of all, great to be with you, Jordan here down in Phoenix at the Kari Lake event for election integrity. One year later, elections have consequences. Stolen elections have far worse consequences. We barely won Virginia last night. We won it because we won Chesterfield, we won rural Virginia, and we won Virginia Beach. They turned out in massive amounts, more than typical, which overcame the fraud and corruption that was attempted in Fairfax County. We’re losing New Jersey. I don’t know if we lost it now as of tonight, because of this fraud and corruption. I am doing everything I can here in Arizona to prevent this from happening, to get to the bottom of the truth, which means Brnovich needs to do his job. And I want to see perp walks. I want to see arrests and I’m going to bear down on the issue until we do.

Conradson: so I just saw Adrian Fontes, former Maricopa County Recorder he was brought in for some questions by Attorney General Brnovich. What do you think will come out of that? Who do you think needs to be in question next?

Rogers: Well, something needs to come out of it and just because fontes has was an attorney with the Attorney General’s Office at one time, he thinks he can skate he thinks he can skirt what is gonna come down on him. And I believe that the justice will be served. And I’ll tell you my constituents in northern Arizona are absolutely adamant, emphatic, HOT that arrests are being made.

Conradson: And not just constituents in your district, constituents around the country, not even your constituents. Constituents of other Legislators. They’re signing your letter to audit 50 states. Yes. How many signatures from how many states have you received?

Rogers: Well, we’re almost to 200 My phone is blowing up every day. I just got two from North Carolina this morning. I’ve got folks on Telegram, on Gab, Gettr, Twitter, Facebook, reaching out to their state representatives and state senators imploring them to get on board on my audit 50 states letter. It’s the only vehicle by which we state legislators from around the country are coming together to demand that we do audits in our states. And if corruption is found, that electors can be recalled.

Conradson: We know laws were violated here in Arizona, we know this election was stolen. We know they’re covering it up. What do we do If they get away with it?

Rogers: They’re not going to get away with it. And here’s the other thing to answer your question. If you know about monkey business that occurred in your county, in Arizona, I represent Gila, Yavapai, Navajo and Coconino counties. I have told my constituents if you know about fraud in one of our counties, you need to do affidavits, and then you need to present them to the sheriff, the sheriff which has broad authority, so that the sheriff can conduct an investigation.

This is on us. We are the plan. God Bless America.

State Senator Wendy Rogers has drafted a letter to our corrupt federal government demanding States’ rights over elections, full forensic audits in all 50 states and decertification where necessary. nearly 200 legislators from almost every state have signed onto the new declaration.

Contact your legislators and demand that they add their name to this historic document.

Racine County sherrifs recently cracked down on a voter fraud operation by the Wisconsin Elections Comission, utilizing retirement homes to abuse the elderly and steal their vote.

These crimes will be prosecuted after the extensive investigation by Raccine County Sheriff Christopher Schmaling.

Gather affidavits, contact your Sheriff and Legislators, canvass the vote, and audit all 50 states.

They will only get away with this disgusting crime against our nation if we the people let them.

We will never let them get away with it.