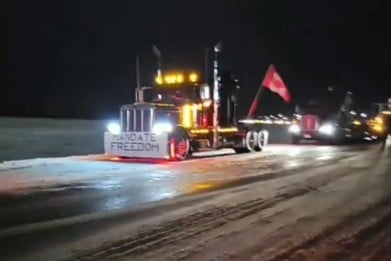 Canadian truckers against COVID tyranny blocked the highway entering the US from Canada both ways on Monday.

One of the trucks had a sign reading, “Mandate Freedom!”

Truckers Stage Protest Against Mandates At The U.S.-Canada Border at Emerson Manitoba pic.twitter.com/iBwZHHlTJC

As The Gateway Pundit reported 10 days ago, Joe Biden is planning on shutting down a significant portion of the trade pipeline with Canada this month.

According to government figures U.S. goods and services trade with Canada totaled an estimated $718.4 billion in 2019. Exports were $360.4 billion; imports were $358.0 billion.

That’s why the truckers are protesting.

WATCH: Canadian truckers against Covid mandates BLOCK all lanes of traffic to and from the United States.

The elites are demanding Truckers disclose their vaccine status.