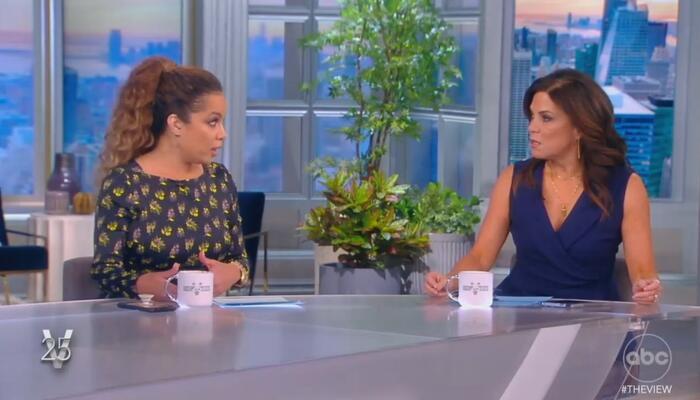 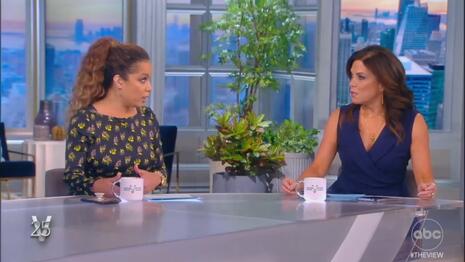 In preparation for today’s election in Virginia, the hosts of The View followed Democrats’ orders to convince viewers once more that Critical Race Theory was “not taught in K-12 schools.” But today, they received pushback from NBC Sports reporter Michele Tafoya which sent co-hosts Whoopi Goldberg and Sunny Hostin into a rage.

Whoopi started off by bringing up the role of CRT in Virginia’s governor’s race and scoffing, “It’s not [being taught], but people are out of their minds. Wouldn’t it just be easier if everybody said, okay! We weren’t teaching it and we will continue not to teach it!”

Sunny Hostin chimed in that the theory was only taught at the law school level, while Joy Behar claimed it was a big distraction from all the great things Biden wanted to do for American families.

“I’m going to push back on that a little Joy,” their guest host, Michele Tafoya said. Behar shot back, “Go ahead, that’s why you’re here.” Tafoya had received their ire in the previous segment for arguing against vaccine mandates. She awkwardly joked back, “I’m here to be the odd man hated on the set.”

Too much honesty there!

The reporter went on to talk about how her son had friends of different ethnicities when he was younger but his school racially segregated social groups to where he was encouraged to no longer be friends with them. “Why are we even teaching at the color of the skin matters? Because to me, what matters is your character and your values,” she said.

Whoopi claimed, it does matter and it was white people’s fault. “We need white people to step up and [change that],” she claimed, as Tafoya suggested they had been since the “Civil War.” This just made Goldberg angrier. “No, no, no. No, they haven’t!” Her example? Lynchings in the South. What century are we living in again?

Still, Sunny Hostin actually said, “There are still lynchings going on today.” And they think Critical Race Theory was a made-up bogeyman?

The heated discussion carried over into the next segment. You could practically see the steam coming out of Hostin’s ears. The liberal host lectured, “it is not being taught. Critical Race Theory is something being taught in some law schools.” She added:

“We had the Secretary of Education, Cardona come on the show, and I asked him specifically. Is Critical Race Theory being taught K through 12 in our public schools? He said, emphatically, no it isn’t,” she stated.

“That is the truth of it and we need to stop normalizing this argument that started in the right — on the right,” she complained, referring to CRT critic Christopher Rufo.

Sara Haines made an anti-CRT argument from a feminist perspective, saying she didn’t want schools teaching her daughter that she was less than because of the patriarchy. After Tafoya backed her up, Hostin fumed, “That’s a great dodge, Sara and Michele. We’re talking about Critical Race Theory that is not being taught in schools.”

But their guest wasn’t backing down. She suggested it was being taught “under a different name.” Bingo. But Hostin and Goldberg wouldn’t let her finish. “They’re teaching history!” Hostin insisted.

After Tafoya brought up an example of schools “erasing history” in the name of wokeism, Goldberg sanitized CRT and hammered home the DNC talking points:

Whoopi then suggested parents, “Go to your teachers and find out what they’re teaching.” I guess she doesn’t realize that’s exactly why parents are so angry…because they finally realized what their kids were learning in school.

Dove and Neutrogena sponsor The View, contact them at the Conservatives Fight Back page linked.

WHOOPI GOLDBERG: Two of them are in a dead heat right now, but my question is like an issue like Critical Race Theory being taught in schools? It’s not, but people are out of their minds. Wouldn’t it just be easier if everybody said, okay! We weren’t teaching it and we will continue not to teach it!

BEHAR: Yeah, but they want to teach it.

BEHAR: I was going to say whenever I hear this type of rhetoric from these type of people, it’s a big distraction. It’s major distraction, and the reason they’re neck and neck is because the Democrats do not do their thing as strong as the distraction is what it is….

TAFOYA: My kids in school, there is a big, big focus on the color of your skin.

HOSTIN: How old are your children?

BEHAR: In what way?

TAFOYA: It’s been going on since they were in lower school, all right? And it is that there are affinity groups on campus for — my son’s first best friend was a little African-American boy. They were inseparable. Get to a certain age. They start having what’s called an affinity group which means you go for lunch and pizza with people who look like you. Suddenly my son wasn’t hanging out with him anymore. My son’s next best friend was a Korean boy. Years, inseparable. He started going to his affinity groups. Why are we even teaching at the color of the skin matters? Because to me, what matters is your character and your values.

WHOOPI GOLDBERG: Yes, but you know — you live in the United States. You know that color of the skin has been mattering to people for —

TAFOYA: Can’t we change it that it doesn’t?

GOLDBERG: We need white people to step up and do that.

TAFOYA: I think, They have been doing that since the civil war.

TAFOYA:  What do you mean they haven’t?

GOLDBERG: They — listen. When you have a country or let’s talk about a state where somebody can be hung from a tree and it’s okay —

GOLDBERG: Well, it was okay. It was okay in the South. People did it all the time. People would run you down.

BEHAR Not that long ago.

GOLDBERG: Not that long ago.

HOSTIN: There are still lynchings going on today.

HOSTIN:  I wanted to weigh in on it because we had the Secretary of Education, Cardona come on the show, and I asked him specifically. Is Critical Race Theory being taught K through 12 in our public schools? He said, emphatically, no it isn’t.

HOSTIN: It is not being taught. Critical Race Theory is something being taught in some law schools. It started in Harvard Law School. That is the truth of it and we need to stop normalizing this argument that started in the right — on the right. Let me finish here.

We know that it started on the right because the person that started it, and please tell me in my ear who started it. He’s admitted to starting it and making it the bogeyman. Now it’s being morphed into a parents’ rights argument. The rallying cry is now parents’ rights. Please don’t teach my children about race. Christopher Rufo. He’s talked about the fact he decided to coin this as a wedge issue, as a divisive issue so Republicans could win races and unfortunately people have bought into it, Sara, to your point. To your question. The other thing is now the message is  that white parents are being ignored when they complain their children aren’t comfortable learning about racism. That their white children don’t want to be uncomfortable. Well, let me tell you something. Black kids around this country are stigmatized and are made to feel uncomfortable every single day, and I don’t think it’s too much to ask white parents to allow their children to learn about the very real history in this country that is still very prevalent, the systemic racism that is still very prevalent in our country. What is so wrong with learning the real history?

HOSTIN: Of our country. [applause] I’m sorry little white kids feel uncomfortable when they hear about it.

HAINES:  If we agree race has been an issue in this country, we can also say it’s also a sexist country. I think we can also agree the history as a patriarchal nation. I have a little boy and a little girl.I don’t want anyone telling them at young, impressionable ages to my little boy, you’re in charge here because you’re a white little boy, and it’s not race, but, like, you are of the majority. You can do whatever you want. The world is your oyster. To my little girl, the world is going to suck. It’s going to be against you because you’re a girl and you’re not going to have as many things. My upbringing was very different from my woman’s as a woman. The world is ever-changing.

HOSTIN: There’s no class in second grade that is called your little boy sucks.

HAINES: No, I’m oversimplifying it–What I’m saying is they’re telling little boys and little girls — this is the way they’re teaching little girls and little boys in some places to say, because you’re a little boy, you can do anything you want. I don’t want my child told that because you live in a sexist nation. I’m using this as an example. — its not about–Critical race theory is a legal, scholarly argument. The name is being coopted. What we’re saying is that the systemic problem should be age-appropriate. That’s what a lot of people are discussing, and that’s why I’m saying in sexism I can speak to that….

TAFOYA: Wait, what are we dodging?

HOSTIN: We’re talking about Critical Race Theory that is not being taught in schools.

TAFOYA: Maybe under a different name. Maybe they’re not calling it–

TAFOYA: But there not because they’ve even erased some history. There was a Laura Ingalls School that got renamed because her books point out these horrible names, so but I don’t think we should erase those. I think kids need to know about the horrors.

GOLDBERG: Here’s the thing. If you don’t think it’s a bad thing for children to know about the horrors, there should be no issue —

HOSTIN: There should be no discussion about this.

GOLDBERG: There should be no problem with history. 5-year-olds are not being taught this. I know we have to go really quick, but 5-year-olds are not being taught this, okay? What you are seeing is what you see really with “Sesame Street” that says, you know, we all have different skin, but we can all get together. That’s what they’re being given. The problem here is if you really want to be a person that takes care of your kids, go to your teachers and find out what they’re teaching.

GOLDBERG: That’s up to you.

TAFOYA: That we can agree on.

GOLDBERG: You know, find out what they’re teaching and then learn about it and you’ll know for sure what it isn’t.