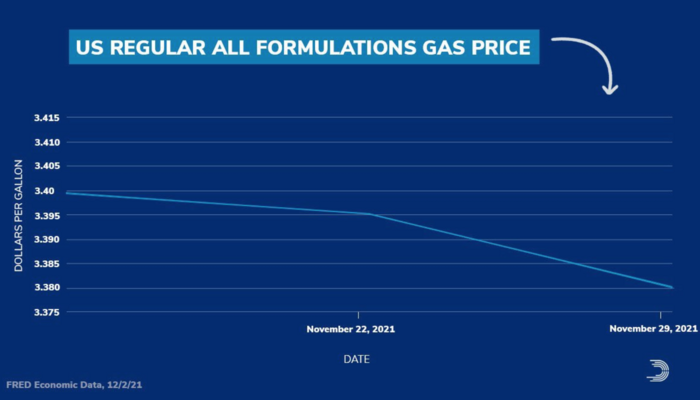 The Washington Post recently published an article by Phillip Bump, which took an uncharacteristic swing at the Democratic Congressional Campaign Committee (DCCC). Bump’s piece, titled “This might be the worst defense of the Biden administration yet,” criticized the DCCC’s suggestion that Americans should thank Biden for a less than one percent decrease in gas prices over the course of November.

As he pointed out, that chart looks quite nice until one notices that the Y-axis on the left covers an absurdly small range:

Were that axis on the left a scale from zero to $4 a gallon, that decrease would be remarkable. Nearly free gas! Certainly something worth hyping.

But the axis does not use the scale. Instead, the line drops from about $3.40 to about $3.38, as marked on the y-axis — or, in layman’s terms, a decline of two cents. And since we’re talking about two cents out of nearly four dollars, that graph depicts a drop in the price of gas of just under 1 percent of the cost.

On its own, a two-cent drop in gas prices during November is barely perceptible. But it gets worse, Bump noted: “Since Biden took office, the price of gas has risen more than a dollar on this same measure.”

When even the Washington Post is taking swings at the DCCC, you know they’ve done something embarrassing.