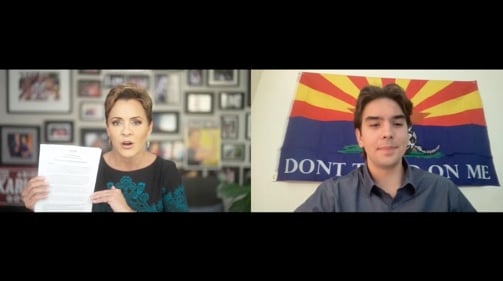 There is a crisis at Arizona’s southern border with Mexico, and Trump-endorsed Gubernatorial Candidate Kari Lake has a bold solution.

Arizona GOP Candidate Kari Lake on OAN: Biden “Couldn’t Even Attract the Number of People at the Port-o-Johns” at a Trump Rally (VIDEO)

Part of the border in Yuma, Arizona, doesn’t even have a barrier, and illegal immigrants just walk into our country so that Border Patrol can pick them up, process them, and send them into America with a court date. Their court dates are often years away.

The Gateway Pundit reported on this area and even captured video of illegal immigrants literally running to the Border Patrol agents.

EXCLUSIVE: Illegal Immigrants Cross Border In San Luis Where NO WALL OR FENCE Is Present – Then Run Towards Border Patrol (VIDEO)

In her official policy release, Kari established, “Any budget that fails to fully fund the border wall’s completion will be vetoed.”

On day one, Lake promises to issue a declaration of invasion to prevent the millions of illegal immigrants, cartel members, and trafficking victims, as well as the drugs that kill our communities, from pouring across our border.

The fraudulent Biden regime has turned every state into a border state by shipping illegal immigrants as far as New York on airplanes, busses, and other means of public transportation.

Lake will draft an interstate compact with other states to protect our nation from this foreign threat. States like New York and Pennsylvania will be able to send aid to the border.

Conradson: Let’s talk about your border policy. An interstate compact to do what the federal government basically won’t. So can you tell us more about what that means, the wall, and how you will ensure these criminals get arrested and actually deported?

Lake: Yeah, well, First of all, it’ll start on day one, and I will take my hand off the Bible after taking the oath of office, and we will issue a declaration of invasion. We have an invasion going on at our border. And it’s not just people coming across who are unvetted. We have deadly drugs coming across in record numbers, and it’s destroying our state. It’s destroying our country because what happens in Arizona as it pertains to the border doesn’t stay here. So in effect, every state is a border state. And we’re going to process these people coming across. So first of all, we’re going to work by starting up an interstate compact with other states, and we’ll work together, pool resources, pool intelligence. We’ll let the federal government know what’s going on, but we’re not going to wait for their approval. They have dropped the ball. It’s a dereliction of duty. Article four, section four requires that they protect us from invasion, and they’re not doing that, and there’s a remedy in the US Constitution. Our forefathers were brilliant. It’s almost as if they saw this day coming. Article I Section 10 allows us to take control and fight back and protect our citizens from an invasion, and we will do that. We will do that, and we will embolden our law enforcement. And we will allow our Arizona National Guard, which I, as Governor, would be the commander in chief of. And I will allow them to start stopping people at the border, arresting them for trespassing, processing them, and sending them back across the border. We’re not going to take this influx of people, many of them criminals, terrorists coming across, cartel operatives, they’re going back, and we have every right to protect our state. Every right, and we need to start doing it now. We don’t need to ask permission from the federal government who’s dropped the ball, turned their backs on us, and I think they’ve done it intentionally under Joe Biden. And I say it’s time we abandoned Brandon and start taking control of our state once again and making sure that our citizens are safe so that our kids can go out on the street and play like we did when we were kids, and they can be safe when they walk down the street. I’m tired of what’s happening in this state, and I think the moms and dads and citizens of Arizona are tired of it as well.

Conradson: That’s right, and this is a national security issue. They are sending them all across the nation, putting them on planes, processing them, giving them court dates four to five years away.

Lake: You’re right, and Joe Biden is behind this. Taking all of the people coming here illegally, many of them dangerous people, and they’re shipping them all over the country. And I think we’re going to be able to find a lot of states that want to join that interstate compact with us to help us. They can send their National Guard, they can send their police, and they can send, you know, just security and help for us and resources because we need to protect our border here in Arizona to protect the people in every state. South Dakota, Iowa, Wyoming, Florida. Every state’s affected by this, and I think there will be a real push from governors across this country to say we’re going to protect our citizens as well.