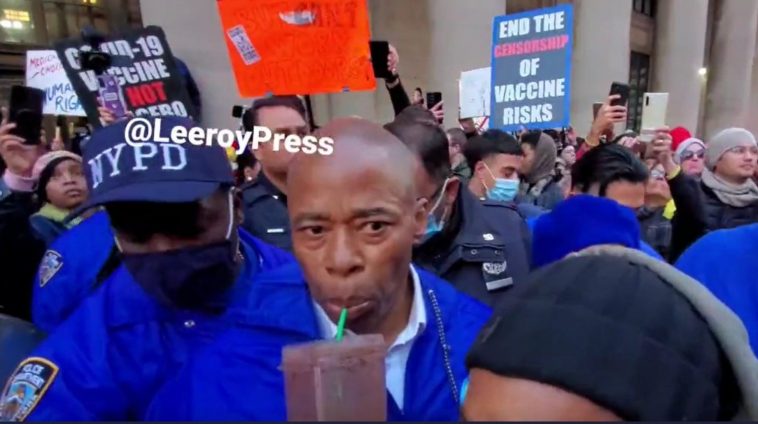 Just hours after winning his race for mayor of NYC, radical progressive Eric Adams was greeted with a rude awakening by a huge crowd of angry New Yorkers.

On Wednesday, the same day he was announced as the next mayor of the Big Apple, hundreds of people gathered outside his downtown Brooklyn office to protest the city’s crippling vaccine mandates.

The crowd chanted “no vaccine mandates,” while several of them greeted Adams with a traditional two-word Manhattan welcome as he scurried away while sipping his smoothie.

Today protesters against mandates show up at the offices of @ericadamsfornyc who’s the incoming NYC Mayor . Eric adams comes out of his office with a smoothy in his hand while protesters yell at him #NEWS #NYC #WEDNESDAY pic.twitter.com/0MIRKcsPIP

Independent NYC journalist Leeroy Johnson was again on the scene to document the event.

JUST IN 🚨 New York’s Mayor-elect Eric Adams face chaotic situation as he walks out of his office to witness anti-mandate protesters.

And one more showing the police escort exiting his building and trying to clear a path for Adams.

Chaos Erupts when Eric Adams comes out of his Brooklyn of office .protesters against mandates start yelling at him and chant ” NO VACCINE MANDATE “#BreakingNews #NoVaccineMandates #NYC pic.twitter.com/wXbHinC3Zv

The protest was organized by BLM New York, which has become more active with its opposition to the vaccine mandates over recent weeks. The pushback from progressive groups in the city, especially ones as radical as BLM, is a terrible sign for things to come for the highly progressive Adams and the anti-American Democrats.