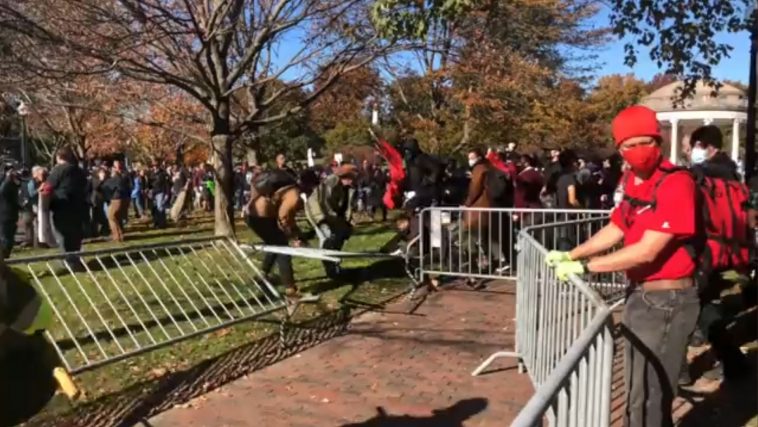 On Sunday afternoon, a large group of Antifa goons targeted a Covid-19 mask and vaccine mandate protest that was held in Boston. The situation quickly escalated into violence once the black-bloc larpers arrived and began to harass the peaceful protesters, which forced the Boston Police riot squad to step in to regain control after fights several fights broke out.

The two crowds were separated by a small barrier, and it stood no chance once the fight broke out.

#developing Video of the Boston protest on the common starting to come in now pic.twitter.com/YOFUVb8r1C

Here is another angle of the altercation. Unsurprisingly, you can see one of the Antifa members is the first over the barricade, swinging a flagpole at two protesters:

Fight just broke out between groups, police broke it up @NBC10Boston @NECN pic.twitter.com/zC4MBnbVLb

The wannabe jackboot thugs were antagonizing people the entire time they were present at the protest. They screamed and used noise-making equipment to disrupt the speakers during their time on stage, and even held a flag that featured the faces of Stalin, Mao, and other oppressive, murderous dictators.

Antifa members were also holding signs that called for violence against the conservative protesters, including several that said: “Death to fascists.”

Several Antifa-backed organizations, including “Green Monster Antifa” and “Solidarity Against Hate – Boston,” organized a “counter-action” of their own. The Antifa groups vowed to make sure that members of Super Happy Fun America “know where Boston stands” and to force them to get the “hell out of town.”

“Mask Up Against Hate, tell the capitol rioters to get out of Boston!”

“tell this whole load of violently misogynistic fail sons to get the hell out of town.”

Super Happy Fun America is planning their return to Boston at noon on Sunday, November 7, with a new COVID-denier group called CORR. Let’s make sure they know where Boston stands: https://t.co/bZolRuPALI pic.twitter.com/1GtifTtxQW

The entire event was so chaotic after Antifa’s arrival that the riot police shut down the Boston common, using hundreds of officers to form a human shield around areas of the park.  Boston Police Officer Stephen McNulty told Fox News that there were “two arrested after opposing sides clashed at today’s scheduled event and planned counter-protest on the Boston Common. BPD assets included officers in protective equipment.”
https://twitter.com/realAlTheGreat/status/1457413461428801543

As of now, it is unknown whether the two arrested were members of Antifa.