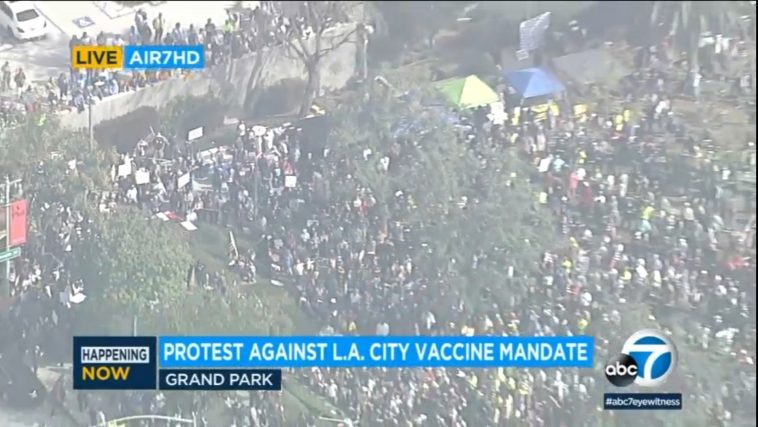 On Monday morning, thousands of citizens gathered in Grand Park outside Los Angeles City Hall to protest the city’s authoritarian vaccine mandate. A large percentage of the crowd – if not the majority – were municipal workers, including members of the LAPD and LAFD, as well as employees of several other city departments.

Los Angeles’ citywide deadline for its employees to get the jab is set to kick in on December 18th. Anyone who is not vaccinated by that time will be fired from their jobs unless they have obtained an exemption – and we all know how likely they are to hand one of those out… ‘when pigs fly.’

The city’s policy is one of the strictest in the nation, and also includes a restrictive mandate on all LA residents that kicked in on November 4th. Proof of vaccination is now required for anyone aged 12 and up to enter the majority of indoor areas, including gyms, restaurants, bars, sporting events (indoor or outdoor), and several other common day-to-day locations, which only fueled the public outrage in the lead up to this massive protest.

The “the March for Freedom Rally” was organized by the local group “Firefighters 4 Freedom,” which is a nonprofit organization that was founded by LA firefighter John Knox in order to stand up against medical tyranny in the wake of Covid-19.

The rally featured several speakers throughout the morning who all shared the same message: “Stop the mandated vaccinations.”

Speeches have started at the anti mandate demonstration in LA as the crowd grows. pic.twitter.com/EqAQ96GmfX

Loud chants of “we will not comply” and “Freedom” could reportedly be heard ringing through the streets.

Many of the protesters waved American flags and held signs that condemned mask and vaccine mandates as they peacefully demonstrated against the restrictive public health measures.

Several city employees even said outright that they were willing to lose their jobs before taking the experimental jab during interviews with local news outlets.

According to NBC4 LA:

“Dozens of people among the crowd were wearing clothes designating their employment with the Los Angeles city and county fire departments, the Los Angeles Department of Water and Power, the Los Angeles County Metropolitan Transportation Authority and other government agencies.

Many people who appeared to be government employees declined to be interviewed, but a few employees said they were prepared to lose their job over the city’s vaccination mandate, which gives them until Dec. 18 to comply.“

Hundreds of pro-freedom & liberty citizens, firefighters, police officers and frontline workers gathered in downtown Los Angeles to protest against the mandates enacted by the city on the same day that proof of full injection went into effect.

🔥THIS IS THE WAY HOME. pic.twitter.com/y5LAMd0B7d

These mandates are medical tyranny – plain and simple. Americans must stand together like they did today in LA to fight against the Left’s dystopian power-grab, and do it quickly – preferably before additional deadlines pass that force more Americans to lose their livelihoods.