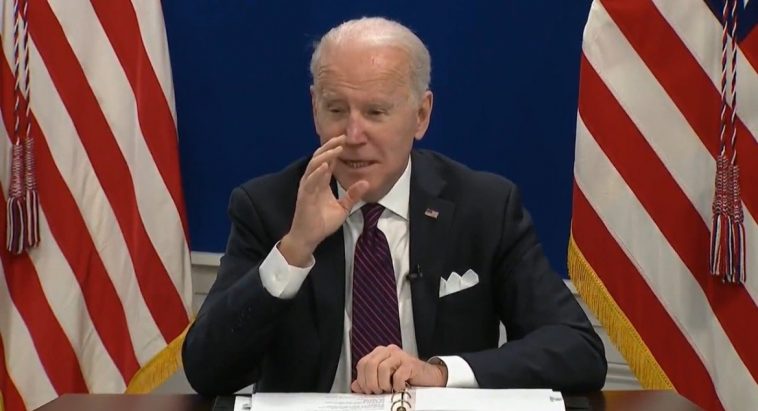 Joe Biden on Thursday held a virtual meeting with his Council of Advisors on Science and Technology.

A Fox News reporter shouted a question to Joe Biden as his aides escorted them out of the South Court Auditorium next to the White House.

“Why are you waiting on Putin to make the first move, sir?” Fox News reporter Jacqui Heinrich asked Biden as his handlers shooed away the press.

“What a stupid question,” Biden said.

The official White House livestream didn’t air the footage of Biden lashing out at the reporter, however outside press picked it up.

REPORTER ON UKRAINE: “Why are you waiting on Putin to make the first move, sir… ?”

BIDEN: “What a stupid question.”pic.twitter.com/SstWm7EqnH

“My guess is he will move in,” Biden said of Putin invading Ukraine. “He has to do something.”

Biden left it up to White House Press Secretary Jen Psaki to act as mop-up crew and ‘clarify’ his comments on Russia and Ukraine.

Earlier Thursday Joe Biden stared blankly at a reporter who asked about the Ukrainian President’s “no minor incursions” comment.