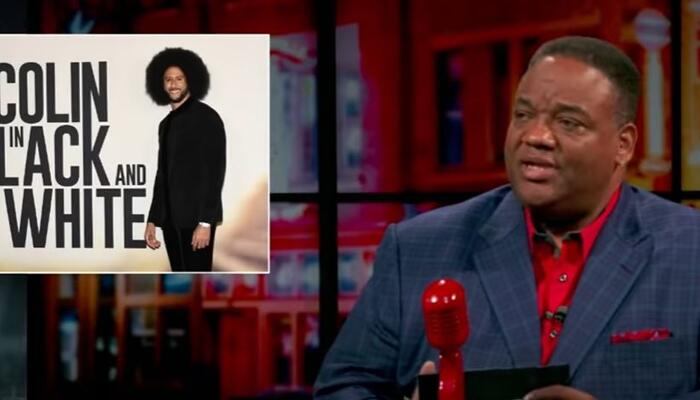 Buckle up! On Monday’s “Fearless” podcast, Jason Whitlock urged his listeners to prepare for his greatest fire yet. He promised to eulogize and bury Colin Kaepernick, a man with “daddy issues” … and did he ever deliver!

As the six-part “Colin In Black and White” Netflix docuseries ended, Whitlock characterized the notorious ex-football player as more of a Clayton Bigsby character than black revolutionary Malcolm X and modern-day Muhammad Ali. Bigsby was a popular Comedy Central character created by comedian Dave Chappelle and the world’s one and only black white supremacist. He mistakenly joined the KKK. Kaepernick came across much worse in the Netflix disaster.

The Netflix Kaepernick was easily offended by “micro-aggressions,” These are defined by Kaepernick as small behavioral indignities leaving blacks as degraded, de-humanized and offended. He’s presented as a feminized boy who obsessed about his hairstyle. Whitlock said only an “idiot” would rate a man’s blackness by his hairstyle. Today, hairstyles convey young boys with “daddy issues” who spend more time with their mama at a beauty salon than sitting with dad at a barber shop. Whitlock kept turning up the intensity on his fire, stating:

“Kaepernick, to this day, doesn’t know who he is,” Whitlock claims. “He has severe daddy issues. When you know who you are, you don’t concern yourself with micro-aggressions.”

He’s an unintelligent fraud who signed off on the demonization and ridicule of his white parents, pragmatists who actually chose to raise and love Kaepernick. Throughout the six episodes, they are portrayed as bumbling, passive-aggressive racists with good intentions.

Whitlock urged someone to buy Kaepernick a stripper’s pole, a thong and high heels:

He’s more Cardi B than Huey P. [Newton, co-founder of the Black Panthers] … The guy’s a clown. And you can see it in the damn mini-series that he put out on Netflix. He portrays himself as a clown. An ungrateful clown.

Could you imagine two people adopting you when your real parents won’t [raise you]? And then you take a shit on them in a six-part mini-series on Netflix? Who does that? People keep wondering why I say ‘this stuff feels satanic’ … This is evil, this is wickedness … Anybody defending Kaepernick is repulsive.

Whitlock declared this episode his finest yet since he joined The Blaze. He promised his greatest fire yet, and by exposing Kaepernick and “Colin In Black and White” for what they are, he succeeded beyond his expectations.