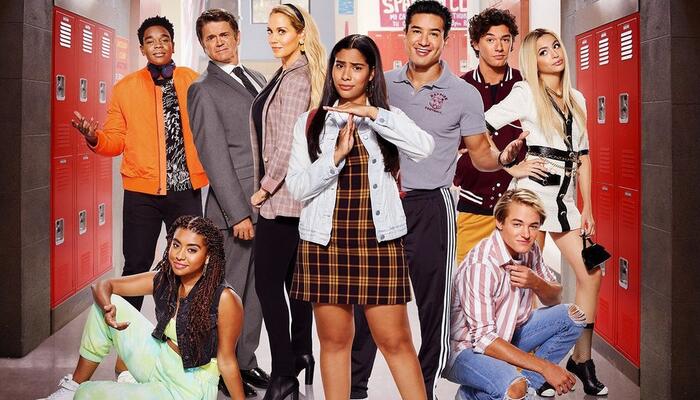 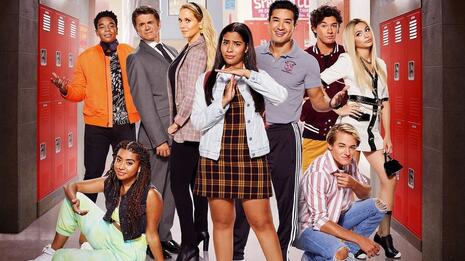 Season two of Peacock’s Saved y the Bell reboot dropped on Wednesday, November 25, and it did what all contemporary reboots do: pushed wokeism in place of originality.

Anyone who was a tween or teenager in the early 1990s knows that an appeal of the original Saved by the Bell was cute boys dating cute girls. In the 2020s version, it is now a cute boy dating a trans female who is really a biological male while his former girlfriend announces she is bisexual and dating a female in the new season. The reboot trades cuteness for sexual confusion.

There are a few token heterosexual teens in the series. The sweet heterosexual boy, Gil (Matthew Sato, dates the pretty heterosexual girl, Daisy (Haskiri Velazquez), but he turns out to be a liar who is just wooing Daisy to win a contest. Those darned heterosexuals are so messed up! Or as one lesbian character puts it about straights at a school dance, “God, it’s going to be so tragic with all the straight kids flossing to the ‘Friends’ theme song or whatever it is they do.” Straight people are passé.

Daisy does start a relationship with Mac (Mitchell Hoog), a handsome lead character with no deceptive intentions towards her, in the season’s final episode. So, the token heterosexual high schoolers at least get one good relationship.

This second season also beats its audience over the head with pro-trans messaging. In episode 5, ‘From Curse to Worse,’ parents from a competing high school petition to have a biological male turned trans female kicked off the soccer team. Trans girl Lexi (Josie Totah) then tries to “solve transphobia” by writing a play in which “the Pope gets trampled by a cow.” The cow represents Harvey Milk, the notorious pederast who is revered by the radical LGBTQIA movement. (In another episode, Lexi reads a book of “Monologues for Sex Positive Sluts.”) The Pope turns out to be the tv character Olivia Pope.

At the end of ‘From Curse to Worse,’ Lexi ditches her play because it goes too far even for the high school’s LGBTQIA pride club. She instead joins the pride club where “queer and trans joy is a form of resistance.” Just to make sure the audience is fully hit over the head with the message, the episode ends with a slide pointing to a website on how to fight “anti-trans” legislation. You know, the kind of legislation that acknowledges biological reality in sports.

Denying biological reality in sports is a chronic problem in this woke new Saved by the Bell. Last season, female sophomore, Aisha (Alycia Pascual-Pena), was somehow the “star quarterback” on a football team of teen boys. She could miraculously beat all the boys on her school’s team and at competing high schools as well. This season, fall football is cancelled after the coach gets an injury so Aisha goes on to be a successful wrestler against boys instead.

When not beating the guys at wrestling, bisexual Aisha “decolonizes her Spanish class”. A clueless white teacher mocks her Dominican Spanish and demands she only speak using the Castilian dialect. When Aisha and the teacher are called to the office, the teacher insults her Dominican heritage and is fired. “I can’t be racist. I’m gay,” he protests. He may the first non-heroic gay character in a teen series in a long time. His status as a nasty white male apparently eclipses his homosexuality in the woke hierarchy.

The word “white” is often used as a pejorative in the series just as it is in most television shows nowadays. Characters speaks in a derogatory tone about “white girls”, the “white man” , and “rich white kids.” Daisy, who is the school’s president and is Latina, investigates whether or not “the Founder’s Dance is racist” and concludes, “It is.”

The show admiringly references left-wing women throughout, from Hillary Clinton to Sonia Sotomeyer. (Is the left finally over its obsession with Ruth Bader Ginsburg?) Daisy and Aisha rant on the bus to school about how they believe rich, famous black (or biracial) women from Megan Markle to Michelle Obama have been mistreated by society. (Yes, really.) And the dialogue on the bus somehow manages to even accuse Ivanka Trump of stealing fashion ideas from one of the original show’s fictional black characters, Lisa Turtle (Lark Voorhies).

A generalized wokeism pervades every aspect of the series, from a BLM/LGBT poster casually in the background of a classroom to trans Lexi’s masculine boyfriend unironically dressed in a gown for the talent show. As with most Hollywood shows, there is no God, but the characters constantly reference “the universe” watching over them.

As an inside joke in the final episode, Lexi remarks on the problem of “all these reboots of teen shows from the ’90s. Like get a new idea, Hollywood!” Precisely. All Hollywood can seem to do anymore is retread popular old series. The big “updates” are just to make the reboots‘ characters gay/trans/bi/pick-a-letter and insert big chunks of dialogue about race. Such reboots are not original, just boring and broken.