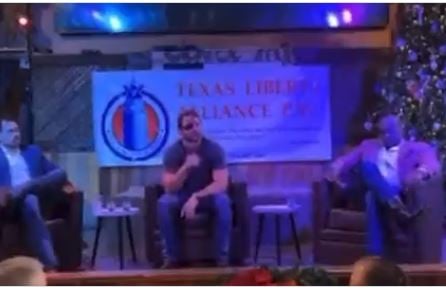 The Texas RINO called the wildly popular House Freedom Caucus, “We have grifters in our midst.”
Crenshaw then defended dirtbag Adam Kinzinger.
What a dummy. Crenshaw made the comments at a Texas Liberty Alliance event over the weekend.

Representative Dan Crenshaw (R., Texas) slammed members of the House’s conservative Freedom Caucus during a recent campaign event, accusing them of being “grifters” and “performance artists.”

“Lie after lie after lie, because they know something psychologically about the conservative heart — we’re worried about what people are going to do to us, what they’re going to infringe upon us, that’s the nature of conservatism,” Crenshaw can be heard saying in video posted to Twitter by lawyer Ron Filipkowski.

Of course, the toxic bunch at The Lincoln Project agree with Crenshaw.

LMFAO Of Course The Lincoln Project Would Side With Crenshaw pic.twitter.com/WKYislh5zk