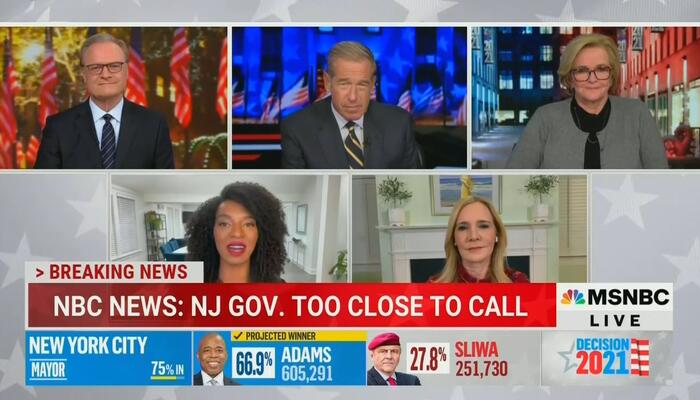 Just when you think we had covered all of the MSNBC meltdowns from Tuesday night over the results of the Virginia gubernatorial election and down ballot races, there were plenty more to cover from both late Tuesday and early Wednesday that, as we saw in the previous coverage, ranged from despondence to hysteria to denial of basic reality.

Co-hosts Rachel Maddow, Joy Reid, and Brian Williams had departed for the night and gave way to weekend morning pundit Ali Velshi and 11th Hour host Lyin’ Brian Williams, but the takes remained plentiful as MSNBCers lashed out at Republicans as a band of Q-Anon supporters that teamed with “soccer dad” Glenn Youngkin to win based on a “racist” campaign of “whiteness.”

As we did with the last one, the following post contains the scorchers and invasions of the body snatchers and are being presented in no particular order in a Notable Quoteables-style format.

RIGGED! Youngkin ‘Ran on a Number of Lies,’ GOP Is ‘Nothing But Lying’

“Youngkin basically ran on a number of lies, one of which is critical race theory being — he was going to end it being taught in our schools. Well, it wasn’t being taught in their schools. Also, the Republican Party now is just a party of — they just tell lies. The election was stolen. The insurrection was — wasn’t an insurrection. It was a false flag operation. I think we have to deal with that and I think we have to find an effective strategy to — to have the American people understand that they’re just — they have nothing but lying right now.”

“We know that the last issue that voters said resonated the most with them came from Youngkin’s campaign, came from this pseudo-argument about education when we know he was, in fact, putting out racist dog whistles that absolutely targeted white women voters who Virginia saw swing back to Republicans…[T]hey are absolutely open to welcoming in this more palatable Republican, who still uses the theme racist themes that Trump did. He just packaged them in a soccer dad, sweater vest model that I’m sure Republicans will try and run across the country in the midterm. And it’s critical that Democrats come up with a response to that, that not only counteracts the lies that the GOP is running on, but also their swing towards…[w]hite supremacy as well, I’m talking about the insurrection, I’m talking about all of the times that members of Congress and the GOP have said it was normal tourist visit. Democrats need to remind voters of all of that[.]”

Fretting Republicans Are Celebrating ‘Too Much’

“I think there’s too much early celebration among Republicans that Glenn Youngkin is the new mold, the post-Trump candidate and a way for the party to pivot. It’s going to be very different next year for congressional and federal candidates in the House and Senate to separate away from the former President, who will loom very large in the ‘22 campaigns with his endorsed candidates…It will be harder for people to talk about whether or not they support Kevin McCarthy for speaker, what do they think of the Big Lie. That’s just going to be a separate kind of question entirely.”

The Midterm Elections Need to Be About…Mitch McConnell?

“I think we also have to make sure we talk not just about Donald Trump but Mitch McConnell. Mitch McConnell is the most unpopular politician in America. They just took a poll of rural Americans. He was the most unpopular of anybody you could think of that you know their name in politics. And he’s the guy who is trying to pull the strings, stop everything good from happening in order to take over power in Washington and I don’t think most Americans are that excited about Mitch McConnell being the face they look at so frequently[.]”

“Well, I think what was very clear is they were okay with the dog whistles of racism, and then they were able to center it very much on this case, but we saw in Virginia, school schools, schools. I think that the challenge for Terry McAuliffe was the moment that he said that parent should stay out of the schools. That’s when Republicans said nobody and let’s not forget critical race theory is not a theme in Virginia. But it is a bellwether of what we’re going to start seeing in other states[.]”

“[T]his should be a wake-up call for Democrats. It’s not one problem that the Democrats have. It’s a number of them. There was a big shift right in the suburbs and rural Virginia. Basically, the only area that I think the Democrats can look at tonight and feel good about is turnout. I think the Democratic enthusiasm was there. It was just that Republican enthusiasm was higher than ever and — and, you know a lot of times we forget to talk about the fact that there are swing voters out there. There are people that are changing their minds. There were voters…that voted for Joe Biden and then came out and voted for a Republican for governor and I think that Democrats need to really internalize that and — and think about, you know, what is it that is alienating those voters. I think some of it is what’s happening with the economy and the coronavirus right now. And I think some of it is the messaging coming from Washington is not a message — is not a message that is connecting with the concerns of these voters. We’re seeing gas prices going up, you know, who are concerned about the fact that their kids, you know, were in hybrid school for so long and — and — and now, they’re hearing from Washington, which is just Democrats infighting over how many trillions of dollars they can spend. I think there needs to be a change in that. There needs to be a pivot from Washington that is addressing the concerns of these voters.”

“Right at the beginning of the hour we heard Glenn Youngkin speak…There were some interesting stuff in what he said. It was soaring, it was big rhetoric, he was talking about restoring excellence in schools, where he talked about budgets in classrooms and teachers and all of that, but he also talked about some other stuff, about making your kids critical thinkers. He talked about a curriculum that includes listening to parents, teaching kids how to think, not what to think, preserving qualified immunity.”

“I also think that we need to figure out a way to address these cultural wedge issues, the racial priming that Republicans have engaged in successfully tonight, the taking of fantasy land and making that politically, ‘a real issue’ like critical race theory, that is anything but. Democrats have not come up with an effective way to address that. We need to do that. We need to use issues that benefit us. I didn’t see much conversation about the fact that Youngkin, you know, does not support the right to an abortion. I didn’t see much conversation about a sensible path on immigration.”

Keep the Faith, Guys! Who Knows What Next Year Will Bring!

“The one thing we have seen is that all the people who are going to prognosticate about what this means for — for coming elections, let’s just remember a year ago the conversation was incredibly different as we see how it’s played out tonight. Nobody sitting here today can tell you with any certainty what the heck we’re going to be talking about a year from now. That is an opportunity for the Democrats to get engaged, change their tactics, become aggressive, and start defining the Democratic — Republican Party for what it is.”

“[P]eople showed up today in Dealey Plaza in Dallas because of a QAnon rumor that John F. Kennedy Jr., who’s been in hiding this whole time, which is surprising to his family following his death in 1999, was coming back to us to somehow be Donald Trump’s running mate. So that’s where we are. And a fair number of people showed up in Dealey Plaza, only to go home disappointed tonight. We could have saved them the trip. It’s a roundabout way of asking you just how much Trumpism is going to be on the ballot across this country in 2022.”

“The economy actually turns out to be the biggest issue for voters. Education strangely was the second thing that they said was the most important. And I — I don’t know if that really means education, or that’s, as Maria was saying, code for I don’t want critical race theory taught to my kids in school, which doesn’t actually happen.”

“[Democrats] should be pressing the reset button, resetting on how they respond to these horrible, racist dog whistles from the GOP and the lies from the GOP, resetting on how they sell their policies to voters and make sure that voters fully understand it. They’re fighting tooth and nail for them…I assure you that the sweater vest, very nice, soccer dad model that Youngkin has put out there, this new — like, I’m a palatable version who still says similar things that Trump said, especially when he — we saw his closing arguments about what he dubbed education when, in reality, it was about race and — and whiteness, when he put that out there, people responded to it. And Democrats have to come up with a substantive rebuttal[.]”

Williams: “I know what I paid per gallon this weekend. There ought to be a mortgage banker next to every pump just for convenience. I know that we have a part in a dishwasher and when you call to get a new part or a new dishwasher, you hear a kind of vague chuckle at the other end. And I know that you can’t get a car. You can’t order a new car. See above comment about vague chuckle. These are current and present issues in American homes and, Tim, to your point, it’s like the Democrats are saying, “whatever you do, don’t talk about these — these lifestyle issues that are affecting each and every American.”

Miller: “Yeah and look. You know, Joe Biden can’t wave a magic wand and make some of the supply chain issues go away and so the prices go down. But what they can do is — is — in politics, is adjust the message to talk about the things that people are concerned about. You look at Virginia, for example. Everybody talked about the critical race theory stuff and the Trump stuff. Youngkin was also running ads that was talking about getting rid of the grocery tax cause prices were going up at grocery stores. You know, this is the kind of thing that, would that have happened overnight? Would that have helped people next week with their grocery bill? No, but it showed that he’s being responsive to things that people are worried about. And I think if you listened to the conversation happening in Washington about the BIF and the BBB and the human infrastructure and all this, it’s a disconnect from — from what people are — are really concerned about the right now and I think that you’re seeing the impact of that in these — in these elections today.”