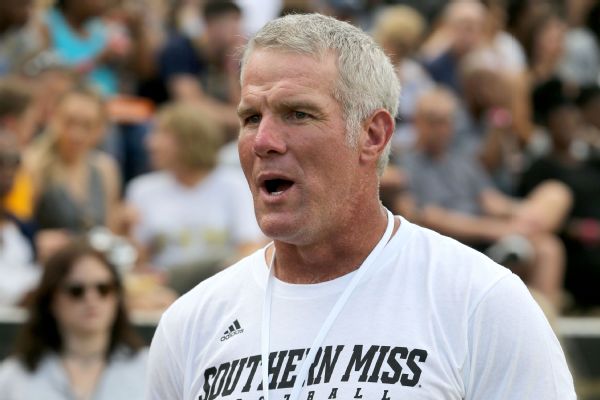 NFL Hall of Famer Brett Favre continued to press Mississippi state officials for help in paying for new sports facilities at the University of Southern Mississippi months after being told by then-Gov. Phil Bryant that the misuse of state welfare funds could be illegal, according to text messages in a court filing.

Favre, who has not been charged in Mississippi’s massive welfare scandal, has said through attorneys that he did not know the origin of the funds.

On July 28, 2019, Bryant texted Favre that the founder of a nonprofit who paid him “has some limited control over Federal Funds in the form of Grants for Children and adults in the Low Income Community.”

“Use of these funds [is] tightly controlled,” Bryant wrote, according to the filing. “Any improper use could result in violation of Federal Law. Auditors are currently reviewing the use of these funds.”

Still, Favre continued to push for a $6 million volleyball facility, according to the 62-page filing that objects to a subpoena for the former governor’s documents in a lawsuit stemming from the state scandal.

According to the filing, Favre texted Bryant on Sept. 4, 2019, after a meeting they and others had to discuss requesting an additional $1.8 million to $2 million for programs at the new facility.

“We obviously need your help big time and time is working against us,” Favre wrote. “And we feel that your name is the perfect choice for this facility and we are not taking No for an answer! You are a Southern Miss Alumni, and folks need to know you are also a supporter of the University.”

Bryant responded, according to the filing: “We are going to get there. This was a great meeting. But we have to follow the law. I am to[o] old for Federal Prison.”

The Holmes Law Firm, which represents Favre, did not immediately respond to a call from ESPN on Friday and Saturday.

A lawyer representing Bryant, Billy Quin, told ESPN that the filing shows that Favre “continued to press for state funds, first from DHS and later in a legislative appropriation.”

“Bryant told Favre that any DHS expenditure would have to be approved by the state auditor,” Quin said.

On Jan. 26, 2020, after Bryant had left office, Favre sought the former governor’s help to obtain a legislative appropriation to cover his personal debt, according to the filing. The same day, Bryant told Favre in a text that he would reach out to then-Southern Miss president Rodney Bennett.

The next day, Favre texted Bryant that he had spoken with “Tate” — current Mississippi Gov. Tate Reeves — and urged Bryant to continue pressing as well, according to the filing. Bryant also texted Bennett, who replied that he had “asked Brett not to do the things he’s doing to seek funding from state agencies and the legislature.”

“As you know, IHL [Mississippi’s higher education system] has a process of how we request and get approval for projects and what he’s doing is outside those guidelines,” Bennett wrote. “I will see, for the ‘umpteenth time’ if we can get him to stand down. The bottom line is he personally guaranteed the project, and on his word and handshake we proceeded. It’s time for him to pay up — it really is just that simple.”

Bryant responded: “Maybe he wants the state to pay off his promises. Like all of us I like Brett. He is a legend but he has to understand what a pledge means. I have tried many time[s] to explain that to him.”

Favre is among the defendants in the state’s civil lawsuit over misspent welfare funds. As first revealed in an investigation by Mississippi Today, state auditors determined that at least $77 million in welfare funds were misspent or stolen in the largest case of public fraud in state history.

Bryant, who has not been charged with a crime, said in his filing that he did not know about efforts to divert state welfare money. He said he had offered to help Favre raise private donations and corporate sponsorships. The subpoena for his records, the filing said, “was brought in bad faith … because he refused to turn a blind eye to the crimes perpetrated by New and Davis.”

Bryant’s filing said he “does not contend or imply that Favre violated applicable laws or that he did not perform promotional services for [the nonprofit].”

Favre, 52, repaid $1.1 million given to him by New’s organization, but the state says he still owes interest on the debt totaling $228,000. The retired quarterback, a Southern Miss alumnus, has insisted that he did not know the source of money dedicated to the volleyball project.

“As I suspected Deion’s son asked where the indoor facility was and I said [we] don’t have one but [we] are hoping to break ground in less than 2 years,” Favre texted Bryant, according to the filing. “Now that will not happen without your help/commitment!!! I know we have the Vball to complete first and I’m asking a lot with that and I believe 100% that if you can get this done Nancy will reach and help many and in the recruiting war [a new indoor practice facility] will give USM[‘s football program] instant credibility and [USM football will] become relevant again.”