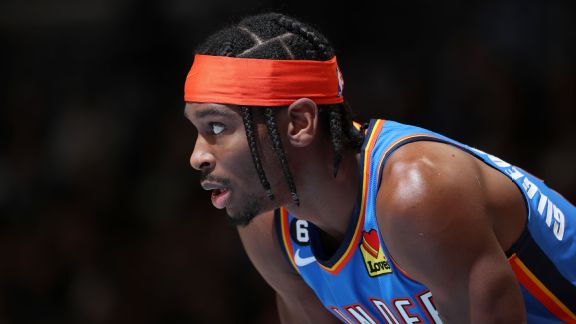 It’s Week 6 of the fantasy basketball season and one player who seems to have slid way too far in almost every league’s draft is Shai Gilgeous-Alexander — an early MVP candidate.

So where would SGA be picked if our experts could do things over and draft today?

Create or join an ESPN Fantasy Basketball league today and draft your league any time before the first game tips off every Monday. Your league starts fresh with 0-0 records for the new matchup period.

It should be Round 1! Gilgeous-Alexander just continues to improve, and while I doubt anyone expected he would average more than 30 PPG, it all looks legitimate. He’s among the top 5 in field goal attempts per game, in part because Josh Giddey is the only other member of the Thunder asserting himself enough to be among the top 65 in the league in attempts. Will this change? Doesn’t seem like it. SGA can shoot as much as he wants, and he’s offering more steals, blocks and shooting efficiency than ever before. This is clearly a top-10 NBA fantasy option. — Karabell

The Player Rater isn’t infallible, but it is a fair representation of statistical value and balance in that each main category is weighted versus a given positional pool. Shai is currently third on this index of value and if I had to guess he’ll end up in the top eight by season’s end, as we can expect some level of regression to his amazing defensive stats. But there is clearly a path to unfettered usage on a team that appears more comfortable trying to win games than in years past. This all said, I’d take Gilgeous-Alexander right around the end of the first round, ahead of the likes of Ja Morant, Trae Young, James Harden, Damian Lillard and such. — McCormick

Drafting for a one-week hypothetical matchup that plays next week, with games-played totals equal? I would draft SGA No. 2 overall regardless of format (however, my No. 1 overall pick would shift.) If I smoosh roto and points valuations together, I’d put Luka Doncic, Gilgeous-Alexander and Stephen Curry in the top tier. But in terms of drafting for the rest of the season? I’d be hard-pressed to draft SGA higher than eighth overall. Because it’s OKC … and because Victor Wembanyama is that good. Their propensity for deep-sea roster building is something you have to assume will repeat itself until it doesn’t. — Cregan

If I were drafting today, I’d take Gilgeous-Alexander in the back half of the first round. I would still put Luka, Nikola Jokic, Jayson Tatum, Giannis Antetokounmpo and Tyrese Haliburton ahead of him. Other than that, he’s fair game. I still worry about availability over the course of the season; he missed 26 games last season after missing 37 the season before. Plus, the Thunder are heavily invested in the Victor Wembanyama sweepstakes, and it doesn’t behoove them to win too much this season. With that said, SGA is producing video game numbers on a nightly basis right now and has earned a spot in the first round of redrafts this season. — Snellings