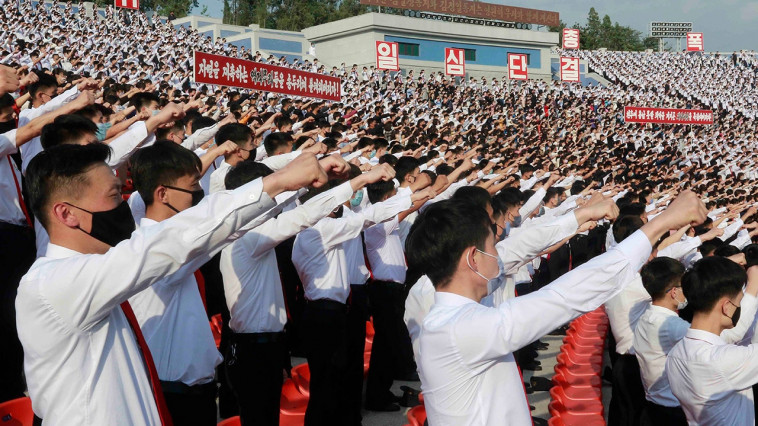 SEOUL, South Korea – Life inside Kim Jong Un’s totalitarian regime is drastically different from the facade of strength and power the hermit kingdom projects to the outside world.

Nobody knows that contrast quite like the North Korean defectors who have lived through and escaped from the most dangerous and closed off countries in the world.

“It’s better to die than to live this way,” a 25-year-old North Korean defector told Fox News in a café in Seoul, Korea. Speaking anonymously, she remarked on her “aha” moment — when her desperation led her to make the leap — to have a shot at a new life in a cosmopolitan city miles away.

“Regardless of the risk, life in North Korea was not worth it,” she said. The defector, who escaped in 2019 at the age of 23, is among the many women who make the journey south.

Years prior, when her mother escaped to China, she became a target for the regime. The government limited her job options and slashed her pay entirely. Her dreams of going to medical school and becoming a doctor were cut short. She was able to work as a nurse with no pay, getting by with money her mother sent from China.

“It’s hard to survive,” she said. “A lot of the health problems that we see have reduced … [But] it’s still a very prevalent issue, malnutrition.”

But the struggles that everyday North Koreans face are unrivaled to citizens sent to labor camps.

“They send the entire family into this concentration camp, and they make sure to put them on different work shifts, so the family is never reunited,” she said. “The whole purpose of this is to prevent people from escaping because they think that if one of the family members is at work, then they won’t just leave the family member behind and leave.”

North Koreans who are sent to camps are considered criminals by the government. However, it is crimes against the government that can land North Koreans in camps with the harshest conditions. Often, those sent to these camps will serve a life sentence.

The defector said the government goes to great lengths to conceal the camps from the public eye.

“There was this one concentration camp that just disappeared overnight because they wanted to give a false image that it wasn’t there,” she said “They moved all the people that were originally in the concentration camp elsewhere, and they made this facade of a small village. So they brought in like just regular coal miners to live there.”

This defector said she was determined not to make this situation her reality. Using the money she received from her mother in China, she was eventually able to pay smugglers to lead her to safety in South Korea through China.

Working with advocates at an organization called PSCORE (People for Successful COrean Reunification) she is on track to graduate college and hopes to extend the non-profit’s mission to help defectors in Seoul.

But not every defector is as lucky. North Korean defector and CEO of the non-profit Woorion Daehyeon Park offered this dire assessment:

Park started Woorion to meet the needs of the 33,834 defectors living in South Korea that are struggling to build their lives in a modern, high-tech society.

Park says he can relate to defectors who say they feel transported to a new world.

“Imagine that I was still living in the 19th century, and at a certain point you cross the river, and you take [a] taxi … and I see the cities, and it’s just like I’m living in this … city of movies, one of the movies that I was just watching, and that was when I realized wow,” Park said. “The school system taught me that North Korea is the envy of the world, you know this is the best country in the world.”

North Korean soldiers looking toward the South at the DMZ. South Korea is reportedly broadcasting news about the defector through loudspeakers. (Reuters)

Woorion helps defectors utilize the resources in the country that they have only seen in boot-leg western movies. According to the non-profit, 72% of defectors do not know where and how to find helpful information for their resettlement.

“They’re not meant to come here to treat us as second-class citizens,” Park said.

Roughly one in three defectors are vocal about their experience and 93% of Woorion members say that the organization is an integral part of their lives.

For families left behind, they often find little solace from non-governmental groups that are shut out from the isolated nation.

Reunification is not the consensus of all South Koreans, despite calls from defectors and older generations who remember families torn apart during the Korean War. According to the Asian Institute for Policy Studies, “from 2011-2017, about 25% of South Koreans in their 20s admitted they were not interested in unification.”

“The majority of North Koreans are just innocent people, just like my mama, my dad, my whole entire family,” said Park. “I want them to have freedom.”

“The younger generation … they don’t trust the [North Korean] government as much,” a 25-year old defector told Fox News Digital. “They want change and they want radical change. And if this reunification will get them the change that they want, then they support it.”

Kim Tae-Hoon, the president of PSCORE and former deputy chair of the North Korean Human Rights Committee, told Fox News Digital that “the only solution is to have the unification.”

For those desiring unification, Beijing is viewed as one of its greatest obstacles.

North Korea’s strong ties to China only add to those complexities as China repatriates North Koreans who try to escape from the grips of Kim Jong Un. Tae-Hoon argues that the will of the Korean people and knowledge of the western world will motivate the North Korean people to push for reform.

“There is hope that there can be change within the country,” said Tae-Hoon. “The North Korean people have this desire to know more.”

For most North Koreans unfettered access to social media and a free press is a world they do not know. But as more and more people escape, the world is getting a greater picture of a kingdom far removed from the rest of the world and its norms.

Lacey Christ is a producer with “Fox News @ Night.”