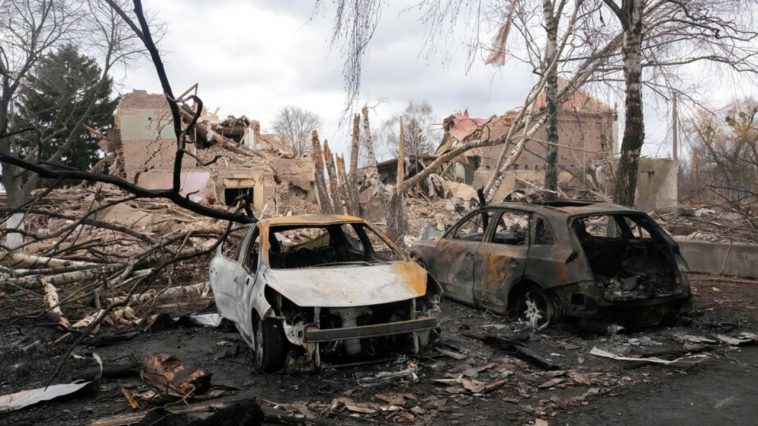 Powerful images have exposed the heart-wrenching realities of Russia’s invasion of Ukraine.

The United Nations (UN) human rights office has reported 351 confirmed civilian deaths and the Geneva-based office said another 707 civilians were injured between Feb. 24 and midnight on Friday.

Marina Yatsko and her boyfriend Fedor comfort each other after her 18-month-old son Kirill was killed by shelling in a hospital in Mariupol, Ukraine, Friday, March 4, 2022.  (AP Photo/Evgeniy Maloletka)

Russia said Wednesday that 498 of its troops had been killed, and has not updated the number since.

Now, on the conflict’s tenth day, 1.4 million residents are reportedly fleeing the country.

A semi-conscious woman is attended to by Ukrainian soldiers after crossing the Irpin river as fleeing the city in the outskirts of Kyiv, Ukraine, Saturday, March 5, 2022. (AP Photo/Emilio Morenatti)

The UN estimates that 12 million people in Ukraine and 4 million people heading to neighboring countries will need humanitarian aid in the coming months.

Speaking Saturday, Russian President Vladimir Putin warned that his country would consider any third-party declaration of a no-fly zone over Ukraine as participation in the war there, accused Ukraine of sabotaging a cease-fire arranged in two cities to evacuate civilians and even claimed Ukraine’s leadership was calling into question the future of the country’s statehood.

Firefighters work to extinguish a fire at a damaged logistic center after shelling in Kyiv, Ukraine, Thursday, March 3, 2022. Russian forces have escalated their attacks on crowded cities in what Ukraine’s leader called a blatant campaign of terror.  (AP Photo/Efrem Lukatsky)

According to The New York Times, Putin also said western sanctions imposed on his country were “akin to a declaration of war.”

In Mariupol, a strategic port in the southeast, Mayor Vadym Boychenko said thousands had gathered for safe passage out of the city when the shelling began.

Stanislav, 40, kisses his wife Anna, 35, on a train to Lviv as they say goodbye at the Kyiv station, Ukraine, Thursday, March 3. 2022. Stanislav is staying to fight while his family is leaving the country to seek refuge in a neighboring country. (AP Photo/Emilio Morenatti)

Reuters reported Friday that Boychenko said his city is without water, heat and electricity – and is running out of food.

Photos from a Mariupol hospital show parents mourning the death of their 18 month-old son.

Ukrainians crowd under a destroyed bridge as they try to flee crossing the Irpin river in the outskirts of Kyiv, Ukraine, Saturday, March 5, 2022. (AP Photo/Emilio Morenatti)

To the north, the fight continues around Ukraine’s capital city of Kyiv.

A Ukrainian serviceman holds a baby crossing the Irpin river on an improvised path under a bridge that was destroyed by a Russian airstrike, while assisting people fleeing the town of Irpin, Ukraine, Saturday, March 5, 2022. What looked like a breakthrough cease-fire to evacuate residents from two cities in Ukraine quickly fell apart Saturday as Ukrainian officials said shelling had halted the work to remove civilians hours after Russia announced the deal. (AP Photo/Vadim Ghirda)

Photographers captured destruction in the village of Bushiv, about 40 kilometers to the west of Kyiv.

A 40-mile Russian convoy has been stalled approximately 20 miles outside of the city and residents are bracing for impact.

Many of those shown leaving the city – at Kyiv’s train station – are women and children, as Ukrainian men have been ordered to stay and fight.

In the towns of Bucha and Irpin, crowds moved together under destroyed bridges, with Ukrainian servicemen carrying children while crossing the Irpin river.

Aleksander, 41, presses his palms against the window as he says goodbye to his daughter Anna, 5, on a train to Lviv at the Kyiv station, Ukraine, Friday, March 4. 2022. Aleksander has to stay behind to fight in the war while his family leaves the country to seek refuge in a neighboring country. (AP Photo/Emilio Morenatti)

On a Saturday phone call, Ukrainian President Volodymyr Zelenskyy made a “desperate plea” to U.S. senators, asking for Eastern European to provide Russian-made planes to help his country.

“I will do all I can to help the administration to facilitate their transfer,” Senate Majority Leader Chuck Schumer said in a statement. 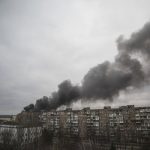 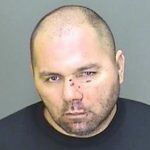